WBA Super, WBO and IBF champion Kambosos Jr faced off with WBC title holder Haney ahead of their showdown in Melbourne; watch Kambosos Jr vs Haney for the undisputed world lightweight championship live on Sky Sports Main Event and Action from 2am on Sunday, June 5

George Kambosos Jr has stoked the fires ahead of his undisputed lightweight world title clash with Devin Haney by accusing the American of passing on information about the Australian’s previous opponent.

Kambosos Jr (20(10)-0) claimed the WBA Super, WBO and IBF world lightweight belts with a split-decision win over the previously undefeated Teofimo Lopez in an epic showdown in New York last November which saw both fighters knocked down.

The 28-year-old now returns to box in his homeland for the first time in five years for the showdown against the unbeaten Haney (27(15)-0) in Melbourne, live on Sky Sports on Sunday morning, and took aim at the WBC title holder by accusing him of passing on gossip about Lopez ahead of that contest.

"This guy is an informant, this guy is a rat and I'll tell you why: The Teofimo Lopez fight with a foreigner against his own countryman, he was messaging me telling me all the details.

"This is a rat, this is a sneaky informant and you know what? This is your own countryman you're going behind his back. 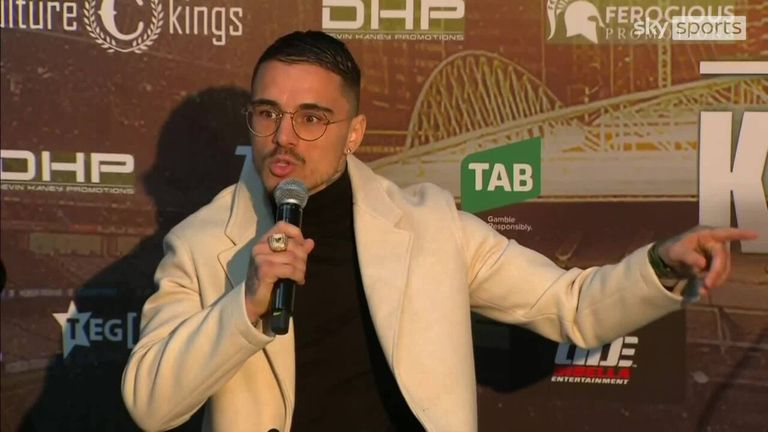 "So, you know what? On Sunday, I'm going to whip your a** and when you're back in Las Vegas, you'll be on the lookout for Teofimo Lopez because he'll be looking for you too."

One person who has not been allowed into Australia is Haney's father and trainer Bill, who has been denied an entry visa. Instead, Yoel Judah, the father of former two-weigh world champion Zab Judah, will be in the 23-year-old's corner for this fight.

Haney has not given up hope on Bill being allowed to enter Australia and be ringside with him, although he concedes it is unlikely and is confident he can add Kambosos Jr's belts to his WBC crown in his absence.

Sunday, I get to step inside the ropes and punish this guy.

"My dad has been coaching me from the phone as much as he can, but at the end of the day me and Yoel have been getting our chemistry together and doing our thing together," Haney said. "Everything has been going great, it's okay my dad can't make it and I feel ready.

"Things have definitely been different without my father here, but the show must go on. This is a dream of mine [to fight for the undisputed crown] and I wasn't going to turn it down.

"My dad installed the right things into me and I'm ready, and on fight night I'll show it. My father isn't here, but I'm leaving with those belts."

There's nothing he can do in the ring that's better than me and I will show it on fight night. I take nothing away from him, I think he's a good fighter, but I think I'm on a different level.

Haney was less than impressed with Kambosos Jr's antics at Monday's pre-fight press conference as the pair traded verbal barbs, having previously done so on social media too.

"He's nothing but an actor," Haney said. "He's putting on an act, a facade, but at the end of the day I take nothing away from him. I have respect for him, I look forward to sharing a ring with him and putting on a good fight for the fans.

"There's nothing he can do in the ring that's better than me and I will show it on fight night. I take nothing away from him, I think he's a good fighter, but I think I'm on a different level." 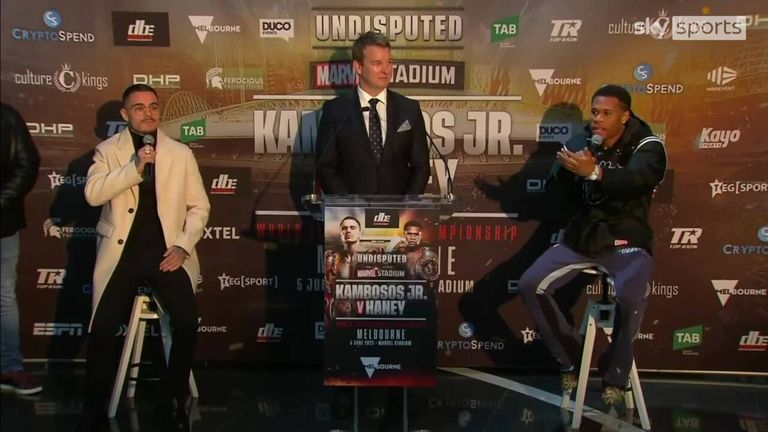 Kambosos Jr will have a significant backing from the Australian public at Marvel Stadium though, with the fight being a sell-out, and is happy to be considered the underdog as he bids to become the first undisputed lightweight champion since Pernell Whitaker in 1990 and the first of the four-belt era.

"It's okay, I've been the underdog my whole career," Kambosos Jr said. "I kept turning up, I am the top dog, so no problem - you can have me at whatever odds, just like I was in the Lopez fight, and I'll handle business this Sunday.

"The guy likes to run, he likes to move - nothing special, the holes are there. He's been hurt by an old pensioner in [Jorge] Linares, he was hurt by a little featherweight/bantamweight in Joseph Dias - I was there ringside and nearly fell asleep to be honest because it was that boring - but Sunday, I get to step inside the ropes and punish this guy."