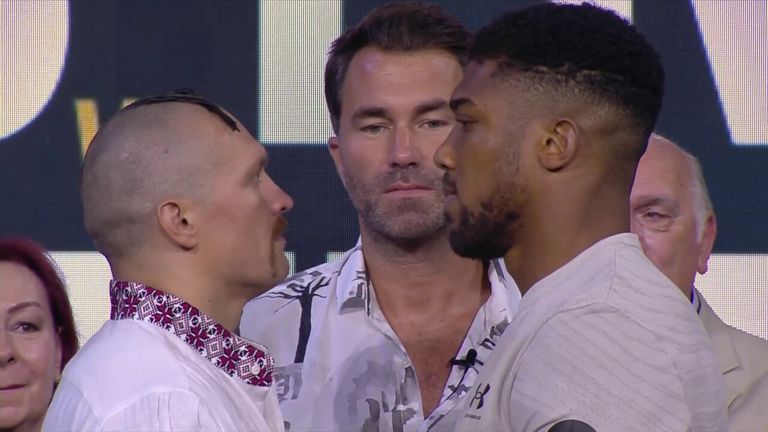 Oleksandr Usyk was only marginally heavier for his rematch with Anthony Joshua, while the British star was four pounds heavier for Saturday's fight, live on Sky Sports Box Office

Oleksandr Usyk was only marginally heavier for his rematch with Anthony Joshua, despite rumours of a sizeable weight gain, as the two rivals shared a 107-second stare down on the stage ahead of Saturday's fight in Saudi Arabia.

The Ukrainian came in at 15st, 11lb and 10oz having weighed a then career heaviest 15st 11lbs (221lbs) when he beat Joshua to clinch the IBF, WBA and WBO belts at Tottenham Hotspur Stadium in September.

Training footage and speculation throughout the build-up had pointed towards a significant bulk-up on Usyk's part in anticipation of a more aggressive, front-foot Joshua in contrast to the two-time world champion's foiled plans to match his opponent's technical prowess in the opening fight.

"You see your expectations are not always met," said Usyk afterwards. 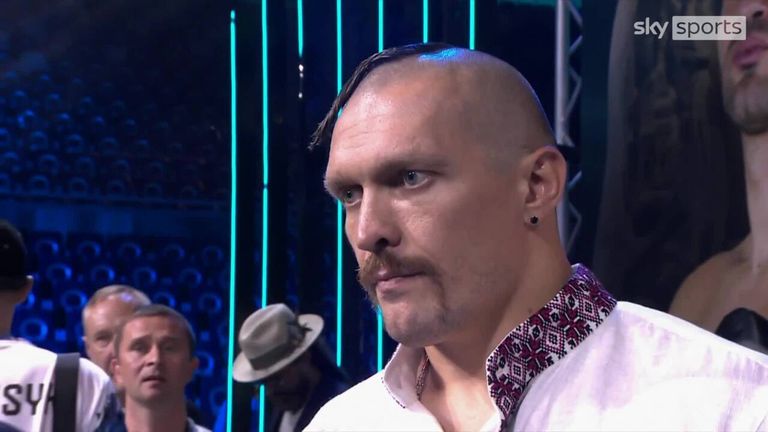 Usyk gives his thoughts after a very intense weigh-in and face-off against Joshua, ahead of their crunch rematch

Where the two had exchanged pleasantries ahead of their opening exchange in London, there was an icy feel to proceedings as the rivals shared an extended face-off. 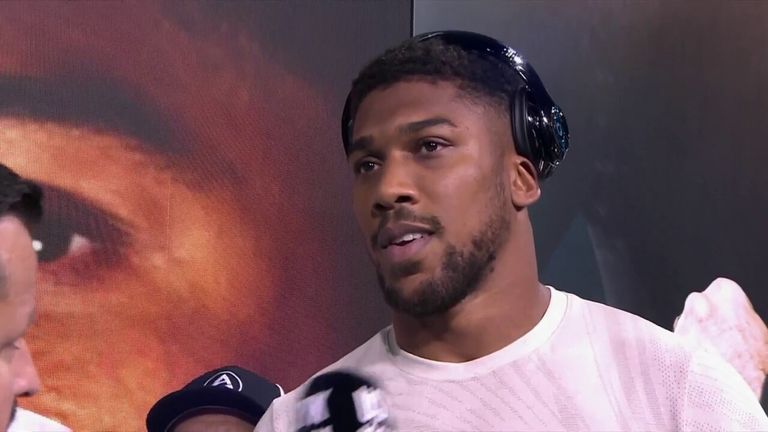 Joshua gives his reaction to his intense face-off with Usyk, with the pair now just a day away from their highly-anticipated rematch

"I'll be honest all this stuff doesn't matter, it's just about the fight. Weight, face-offs, none of it matters to me, just looking forward to the fight.

Usyk was 15st 5lbs (215lbs) for his first fight after moving from cruiserweight to heavyweight against Chazz Witherspoon, before rising to 15st 7lbs (217¼lbs) against Derek Chisora and 15st 11lbs (221¼lbs) in his world title clash with Joshua.

His career lightest stands at 198¼lbs in his cruiserweight days, which he fought at on more than one occasion and most recently in his win over Tony Bellew in 2018.

Prior to September's defeat, Joshua had fought Kubrat Pulev at 17st 2lbs 13oz (240.8lbs) after reclaiming his world titles against Andy Ruiz at 16st 13lbs (237lbs).

Earlier on the undercard weigh-in, Callum Smith cut a confident figure on the scales at 12 stone, 6lb and 11oz ahead of his light heavyweight contest against Mathieu Bauderlique (12st 6lb, 8oz).

"I feel good, I feel strong at this weight, hopefully I can take the confidence into the ring," said Smith. "I've got new goals and that's to become a two-weight champion. I feel very good, I think when I'm good I can beat anybody in the world."

Filip Hrgovic was the lighter man at 17st 4lb 15oz ahead of his IBF world heavyweight title eliminator against China's Zhilei Zhang, who was just over 19st 11lbs.