In his latest diary entry, Jason Quigley looks ahead to returning to Las Vegas and reflects on Gennady Golovkin's latest win.

It was confirmed yesterday that I'm fighting in the Hard Rock Casino in Las Vegas the night before one of the biggest fights of the year - Miguel Cotto v Saul 'Canelo' Alvarez. I had a fair idea for a little while but I wasn't able to let it out.

I'm absolutely delighted to be fighting in Vegas again - the capital of professional boxing. It's the place to entertain and I'm going to do that.

These are things boxers dream of - fighting in Vegas on big weekends. The hype and the amount of boxing fans, critics and people there is going to be unbelievable. It's a great experience for me.

It's my second fight in Vegas and it's hopefully another step of breaking me in for the big stages, and hopefully I'll be headlining big fights in a few years. 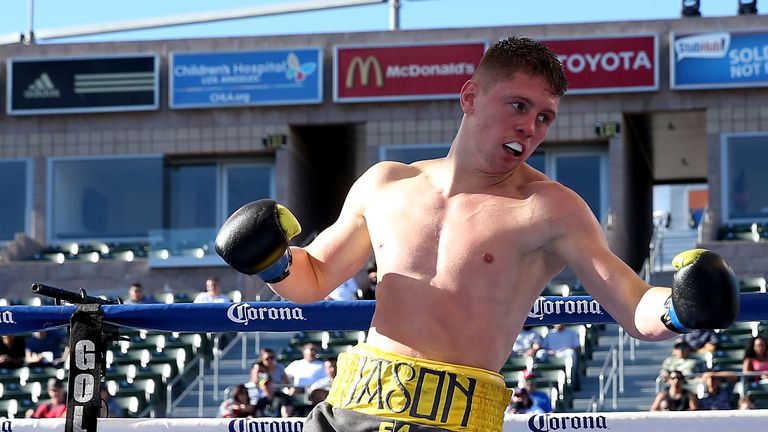 It's my second fight in Vegas and it's hopefully another step of breaking me in for the big stages, and hopefully I'll be headlining big fights in a few years.

I'm not going there to please anyone. I want a performance for myself and for my team because we're working hard in the gym. Number one for me is to put on a clinical performance and the rest is to entertain everyone and put on a show.

It's great because I go there, weigh-in on the Thursday, concentrate on my fight on the Friday, take care of business and then it's time to go and chill and watch Canelo and Cotto do their thing. I think Canelo is too young and too fresh and I think he's going to take care of Cotto.

All these guys are where I want to get to so it's great homework for me. The weigh-ins, the press conference and the way these guys react to things and the way they carry themselves, it's very important for me to be around so I can learn.

I was in camp with David Lemieux getting him ready for that unification fight with Gennady Golovkin. I had great sparring sessions and it was great experience for me to be in with someone who holds what I want to hold in my career.

Golovkin looked very sharp and very good. He kept his distance nicely and stayed controlled. To be honest, I'm not even sure he came out of second or third gear.

Lemieux landed a few shots - especially the straight right to the body - but then he stepped back. It's always different watching the fight, because I wasn't the one in there getting hit by Golovkin, but he could have stepped forward when he landed to throw some more bombs at him.

50 Cent is a great guy. He started his own range of headphones and underwear, as well as training tops. He sent me out some of his gear and we've been in touch. We hooked up at the fight and had a photo and a talk. Everything went well - he's a cool guy.

You can listen to more of Jason Quigley's interview on this week's Toe 2 Toe podcast.