Wladimir Klitschko is interested in an immediate rematch after suffering a dramatic stoppage defeat to Anthony Joshua at Wembley.

The 41-year-old Ukrainian fought back from a fifth-round knockdown and seemed on the brink of victory when he dropped Joshua in the sixth, but the British heavyweight staged an 11th-round onslaught to stop Klitschko.

In the aftermath of an epic fight, Klitschko confirmed a rematch clause, and would welcome a second chance to try and regain the IBF and WBA 'super' titles which are currently held by Joshua.

"Of course, we have it in the contract, I'm right now interested," Klitschko told Sky Sports. "Analyse what the heck has happened. 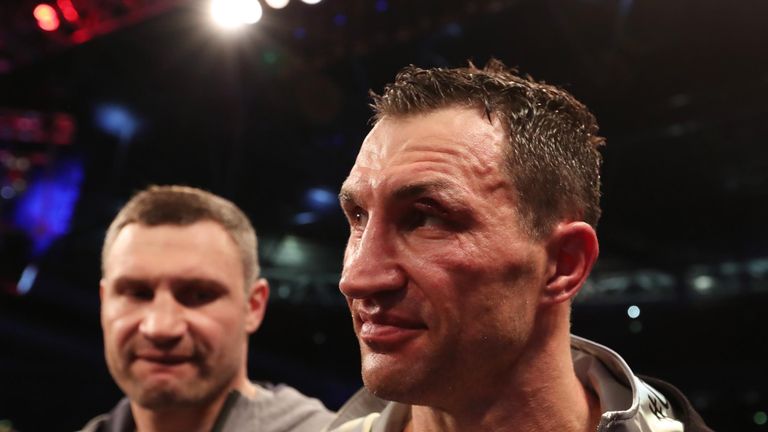 Congratulations to Anthony, he got up, he fought back, and he won the titles.

"I did enjoy the night as well as you. I wish I would [have] raised my hand instead of being someone that didn't make it and win the titles back.

"But congratulations to Anthony, he got up, he fought back, and he won the titles."

Joshua took to the microphone in the ring to challenge Tyson Fury to a fight immediately after his win but he is also open to a second fight against Klitschko.

"I don't mind fighting him again, if he wants the rematch," Joshua said at his post-fight press conference. "Big respect to Wladimir for challenging the young lions of the division.

"It's up to him, I don't mind. As long as Rob (McCracken, Joshua's trainer) thinks it is good I'm good to go."

Klitschko was cheered by the huge crowd after earning their respect with a courageous performance and expressed his respect for Joshua.

"I love you too guys. I hope you enjoyed the fight," he said. "Both fighters were really giving their best.

"The best man won tonight and it's an amazing event for boxing. Two gentlemen fought each other. I say gentlemen, because boxing came from England.

"Anthony was better today than I. It's really sad that I didn't make it tonight. I was planning to do it - it didn't work - but all the respect to Anthony, congratulations.

"A lot of respect to you guys, 90,000 people present, you were awesome guys. Thank-you so much for your support to the sport and this fight."

There are two repeat showings of Joshua vs Klitschko at 9am & 4pm on Sunday. Book them online here or via your Sky remote.