Phil Taylor ended Michael van Gerwen's reign as World Matchplay champion with a stunning 16-6 success and he didn't mince his words after the match.

Taylor's bid to win an amazing 16th World Matchplay title in his final appearance at the Winter Gardens has already seen him overcome Gerwyn Price and Raymond van Barneveld this week.

That challenge continued in incredible fashion against World Champion Van Gerwen as the 56-year-old clinically punished his Dutch rival for an off-day on the doubles to march into the last four. 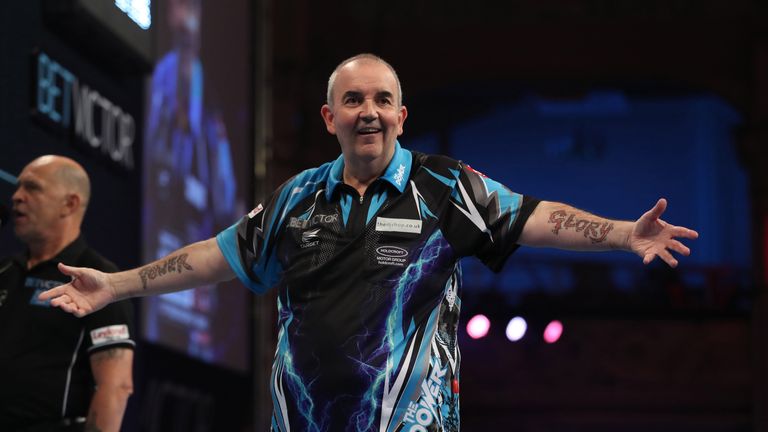 He didn't text Vincent van der Voort tonight, did he?

Van Gerwen had won every televised ranking title since the 2016 World Championship in a period of dominance only previously achieved by Taylor, whose bid for a fairy-tale Blackpool finale will continue on Saturday after he made the 28-year-old pay for 21 missed doubles during the contest.

And speaking to Sky Sports' Laura Woods after his remarkable win, Taylor said: "Well, he didn't text Vincent van der Voort tonight, did he? It's ridiculous.

"During Simon Whitlock's match, he's 8-2 up and texts Vincent van der Voort 'Simon Whitlock's out', I mean what's he doing? C'mon, he's a professional, he's world number one, grow up.

"He's just stupid for doing that and I'm going to tell him that anyway."

Taylor felt the two-time World Matchplay champion was not at the races all week in Blackpool, adding: "His wife is having a baby in a couple of weeks so his mind is not 100 per cent.

"Rankings don't mean anything, they don't. I'm world number eight, but you can still do it. You can. You know why I'm glad? I've proved Wayne Mardle wrong.

"Can I ask the crowd something? Does Wayne Mardle talk a load of rubbish or what?

The 16-time World Champion also had a word of warning for his fellow Stoke thrower Adrian Lewis ahead of their semi-final showdown, saying: "He was my little side-kick even though he never gave me any recognition for it. I used to look after him when he first started but it's going to be good tomorrow. I'm looking forward to it."

Watch all the action from the World Matchplay Darts at the Winter Gardens in Blackpool from 7pm on Sky Action and Sky Sports Mix on Saturday night, or watch for £6.99 without a contract on NOW TV. The arrows run right through until the final on Sunday, July 30.

Who will win the World Matchplay at the world famous Empress Ballroom? Let us know your thoughts by tweeting @SkySportsDarts or by using the comments box below - sign in with Facebook. Follow us on Twitter & use #LoveTheDarts