The World Cup of Darts always throws up some memorable moments and this year was no different.

Netherlands secured their fourth World Cup of Darts crown after retaining the title with a 3-1 victory over top seeds Scotland in Frankfurt. We look back at some of the best bits from this year's event...

Canada suffered a second-round defeat to Japan at the World Cup of Darts, but Dawson Murschell and John Part certainly made their mark with some eye-catching dance moves.

Murschell secured his PDC Tour Card at January's Qualifying School, but the 22-year-old was making his World Cup debut alongside the three-time world champion.

Ahead of their clash against Japan, 'Awesome Dawson' treated us to the floss and the limbo as he entered the stage, before Part also got in on the act, although his moves were spectacular for different reasons!

Belgium secured a spot in their fifth World Cup of Darts semi-final after producing a sublime display to dump out second seeds England in the last eight.

However, the Belgian duo produced one of the most impressive pairs performances in the tournament's history to whitewash Cross and Chisnall.

After the seventh seeds drew first blood in a tight opener, Van den Bergh fired in three maximums in as many legs, as the Belgians registered legs of 13, 16 and 14 darts to secure an emphatic victory with a 100.20 average.

Michael van Gerwen and Martin Schindler contested a thrilling singles rubber in the quarter-finals, with both players averaging 110 apiece as MVG prevailed 4-1.

However, Raymond van Barneveld and Dimitri Van den Bergh went one better in the semi-finals, as Barney posted his highest televised average to defeat Van den Bergh 4-2 and seal Netherlands' place in the final.

Van Barneveld kicked off proceedings with an 11-dart break of throw, before converting a stunning 161 finish for a 12-dart hold to lead 2-0.

Van den Bergh fought back valiantly to level, but Barney showed his class to win the final two legs and prevail with a 113.38 average, as Dimitri lost out despite averaging a brilliant 107.54. 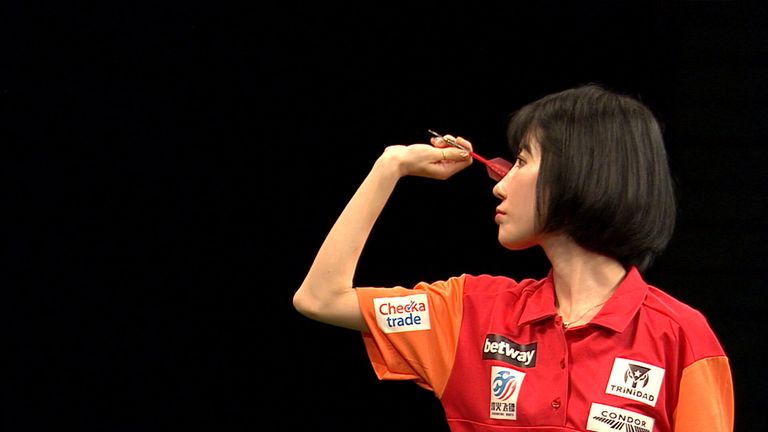 Momo Zhou became just the second female player to feature at the World Cup of Darts as she represented China alongside 20-year-old Xiaochen Zong.

The 26-year-old earned her spot after defeating Zong in the Chinese World Cup qualifier earlier this year, to follow in the footsteps of Anastasia Dobromyslova- who represented Russia in the 2010 edition.

China were beaten 5-2 by Switzerland in the opening round after missing a multitude of darts at a double, but Zhou still provided some memorable moments of her own.

She pinned double 10 to draw China within a leg at one stage, and also managed to celebrate a missed dart at double from their Swiss opponents - a sign of how determined she was to make her mark.

Kyle Anderson produced a moment of magic as he steered Australia to victory over Spain in the second round of the World Cup of Darts.

Anderson then averaged 99.42 as he led Australia to a dramatic 4-3 win in the doubles decider, but their hopes of winning a first World Cup title were thwarted by top seeds Scotland in the semi-finals.

Darts is back on your screens on Sky Sports in July for the World Matchplay - nine days of tungsten on the Lancashire coast get underway on Saturday July 21 and will run through to the final on Sunday July 29.

Stick with us for news, views and interviews and expert analysis. Get all the latest at www.skysports.com/darts and join in the conversation @SkySportsDarts- don't forget to use #LoveTheDarts