Barry Hearn says offering women a direct route into the World Darts Championship eliminates one of the few remaining reasons for a breakthrough at the top level.

On Monday the PDC announced an expanded 96-player field in the biggest development the sport's most prestigious event has seen in a decade.

The growth of the sport in regions across the globe has meant more qualifiers, thereby raising a field from 72 to 96, allowing them the opportunity to offfer two automatic places for women.

"All we can do is open the doors, a few [women] have tried and it's disappointing that they've not come through just yet - some of them are good enough and more than capable but they have to do it on a consistent basis, that's where they have fallen down," Hearn said at the announcement on Monday.

"How much do they want it? We can't just hand over a Tour card, that's not fair to the men and youngsters who are struggling on Development Tours but could hold their own on the main Tour as well, but it has to be a level playing field where you want anyone to be able to rise to the challenge."

Why now? The PDC chairman has always maintained the PDC Tour and its events are open to all - young, old, male or female - as well as the BDO players whose own contracts limit their participation. Women have featured at the Worlds previously with Anastasia Dobromysolva and Gayl King given wildcards.

Later this year there will be a UK Qualifier and a Rest of the World qualifier, most likely in Germany, will also follow - more could follow if they win the various region's qualification tournaments or criteria.

Hearn admits the move may well attract some criticism, but it's one designed to eliminate the reasons for why a woman has not been able to make the breakthrough at the very top of the sport.

"I still cannot believe there is a reason for them not to be up there. The only thing I can think of is lack of dedication on their part or lack of opportunities on our part - so let's create the opportunity.

"The critics will say it's an opportunity once a year but we cannot fast track as we have a system in place like other respected sports - Q-School is and will be the avenue.

"I don't think there should be any favours and for that we quite rightly might get a bit of flak but I don't know any other way of doing it and I had the opportunity to create an increased field.

"I would not have offered the places if the field was still 72 players. But the game is ready for the next big push and I have countries around the world wanting a place and the chance to stage their own qualifier.

"So by fulfilling all of those we still had room to be flexible so have done this along with the winner of the Challenge Tour and the top two places on the Development Tour. We reserve the right to change our tournament but also to give the opportunity."

World champion Rob Cross, five months removed from his own fairytale at Alexandra Palace, like many, insists there is no reason why women cannot throw the same averages as the men and feels the chance to compete is all anyone needs.

"It's amazing to have two women in the event," he says.

"At the minute the men's averages are higher than the women but there is no real reason why that is the case - no-one can answer that so the exposure to top level darts can only help and bring on the women's game too." 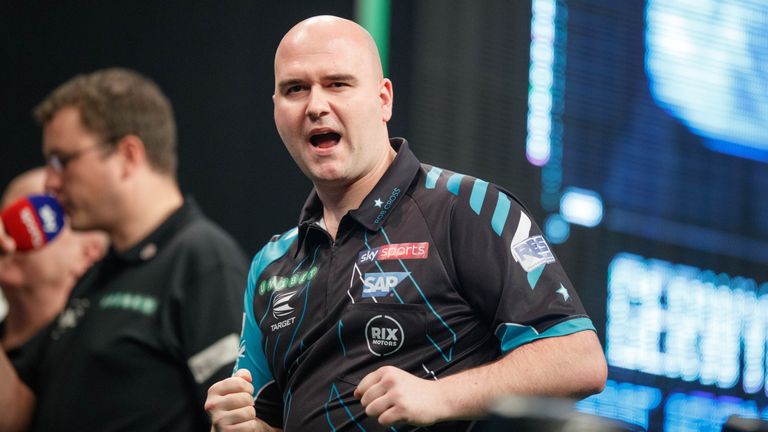 Everyone wants to go and play at Ally Pally - that is the dream that you are encouraging especially with the prize money that is on offer in the game.

In a sport that offers anyone the chance to throw from just over eight feet at the same target and given that anyone can pick up three darts, throw them just over seven feet at a target pinned to a wall, why shouldn't everyone be afforded the same opportunity?

Indeed Cross learned his trade with family matches that included defeats to his mother, while his own daughter will have the best possible practice partner.

"I definitely did," says Cross when he is asked if has ever lost to a woman.

"I played lots of pub darts when I was growing up and played against women. In fact when I first learned to play darts we had a board at home and the whole family would play - mum, dad, uncle - all having games.

"That's how I started and my mum - she beat be a few times and I wasn't too happy but it's your mum, you have to let her off! My son loves it and my daughter if she wants to play but I won't let them beat me!

World No 1 and all-conquering force Michael van Gerwen adds his support to the addition of women to the field - predictably he doesn't care who he plays against, if they stand in the way of a trophy and another title, it's just a player to be beaten.

"Why wouldn't a woman be as good as a man? I wouldn't like to lose to a woman, but I don't like losing to anyone," says van Gerwen.

"Fallon Sherrock won a tournament at the weekend with a 96 average, she would now have the chance to try and do that against the men.

"The prize money is going up, the field is getting bigger, it's all good for darts and it will give the women a chance to win more money by getting to the second round in the PDC than they would get for winning the women's title in the BDO."

As ever the PDC are not afraid to take a risk as they attempt to grow the sport. From hosting the Premier League in Rotterdam and Berlin to moving to Ally Pally from the legendary Circus Tavern, the ambition knows no bounds and Hearn, as ever, insists he is just getting started despite a record prize fund and biggest-ever winner's cheque of £500,000.

"I want to get the first prize to £1m. We have always been looking to push the boundaries and primarily our focus has been on the younger players with the academies - that is the future as they are potentially the next stars.

"You are only governed by your vision of the future."

Darts' vision has seen them continue to grow and expand, they've widened the field and it remains to be seen whether it will be a success but it wont be for the lack of opportunity.

Darts is back on your screens on Sky Sports in July for the World Matchplay - nine days of tungsten from Blackpool get under way on Saturday, July 21 and will run through to the final on Sunday, July 29

Stick with us for news, views and interviews and expert analysis. Get all the latest at www.skysports.com/darts and join in the conversation @SkySportsDarts- don't forget to use #LoveTheDarts