Gary Anderson admits it is a special feeling to finally have his hands on the World Darts Championship.

The Scot defeated Phil Taylor in a thrilling final at Alexandra Palace to lift the Sid Waddell trophy for the first time.

Anderson’s only previous world final appearance came in 2011 when he was defeated by Adrian Lewis, and the 44-year-old told Sky Sports News HQ that he was beginning to doubt if he would ever become a world champion.

“It’s just really nice to actually get my hands on the trophy,” said Anderson, who hit 19 maximums and averaged 97.7 against Taylor.

“For the length of time I’ve played darts and with people doubting me, I was starting to doubt myself and whether I would ever pick that trophy up.

“But I’ve finally got my hands on it so I’ve got to give myself a pat on the back for that.”

Level at 4-4, things seemed to be going wrong for Anderson in the ninth set when he hit a 180, only for all of his darts to fall out of the board.

“Phil then stepped up and put in a 180 himself, and I felt my luck had definitely gone. I just had to dig in and see what happened.” 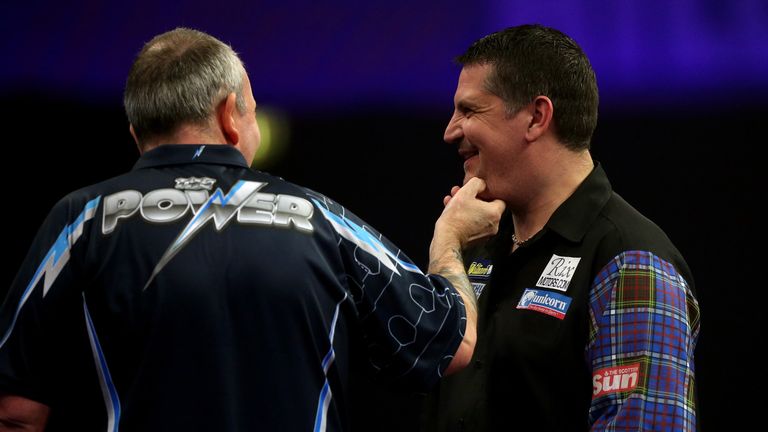 For the length of time I’ve played darts and with people doubting me, I was starting to doubt myself and whether I would ever pick that trophy up.

Anderson was also angered by the behaviour of a fan during the same set, which caused him to bust his score, but he recovered his composure to move 5-4 ahead.

“Every time I went to throw there was a whistle in my ear,” he explained. “It was just as I was letting go of the dart.

“At one stage I was aiming for one and I ended up hitting 18 and bust my score. I wasn’t too happy but Phil got a few of them as well. It’s just something that you have to try and get past.”

Taylor showed his experience to take the match to a deciding set, but Anderson came roaring back to win three successive legs and clinch his first world title.

“I was in the lead and feeling quite comfortable, and then Phil just came back,” he said. “When he got it back to 6-6 the pressure was on.

“I felt absolutely fine (in the final set). I wasn’t that nervous; I don’t know if I’m getting older and wiser. I’ve learnt to enjoy the darts and just take my time."

He added: “I’ve had a really good year. I put a lot of practice in and got my confidence up. I’ve been happy with my game for the whole year.”