The Masters: Bob MacIntyre's impressive Augusta debut another step in his learning process

"There's no doubting his desire to compete with the best players in the world, and be regarded as one of them. And he's certainly on the right track to achieve that"

After Bob MacIntyre guaranteed an invite to the 2022 Masters with a top-12 finish at the Masters, Andrew Coltart predicts a bright future for the highly-rated Scottish prospect.

Bob MacIntyre has enjoyed an encouraging first experience at the Masters, and finishing in a tie for 12th on his debut is a magnificent achievement.

Of all his good qualities, what stands out is where he is mentally right now. He clearly has huge confidence in his own ability, but there's also a nice touch of humility about him.

He's only 24 years old, he's a fierce competitor and, as we saw at the WGC Match Play, he is not intimidated by anybody. I keep having to remind people that world No 1 Dustin Johnson needed the luck to claim a half against MacIntyre in their group match, it certainly was not the other way around.

He said himself this week he's quite happy to "go after it", and it's been hard to tell that this week has been his first visit to Augusta National, he's played like he's been here five or six times. He's gone about his business quietly and efficiently and he's not been overawed by the place in any way.

He had a number of disappointing final days on the European Tour in his rookie season but finally got over the line in Cyprus last year, proof that challenging for professional titles is a tough learning process. 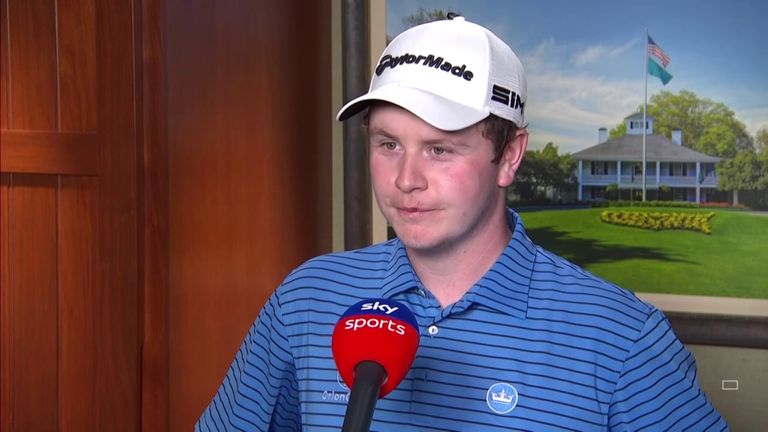 It can take a lot out of you both mentally and physically, but it's about learning what needs to be done and when it needs to be done. He's guided by an excellent team around him, including some who also work with Bryson DeChambeau and Will Zalatoris, so he's in good hands.

There has, understandably, been a lot of attention on MacIntyre in the Scottish media excited by his prospects. We have had a few successes on the European Tour and Russell Knox and Martin Laird have flown the flag for Scotland on the PGA Tour.

But MacIntyre has been tipped for great things and is regarded by many to be Scotland's best hope of a men's major winner since Paul Lawrie won The Open back in 1999. He's certain to attract a lot of attention, and he will need to find ways to deal with that.

He has got a great manager in Iain Stoddart, who's been in this business for many years and knows the value of protecting his players from too much media scrutiny.

But MacIntyre's overall temperament and demeanour tells me he's not the sort to pay too much attention to what's being said about him outside the boundaries of the golf course, whether it's good or bad.

I am pretty confident he will stay fully focused on the job in hand, and there's no doubting his desire to compete with the best players in the world, and be regarded as one of them. And he's certainly on the right track to achieve that.

If he keeps up his current form, he's got a great chance of making his Ryder Cup debut for Europe at Whistling Straits in the autumn, and his encouraging debut at the Masters will have gone a long way to helping achieve that goal. He's played a few events in the United States in recent weeks, and he's staying on the PGA Tour for the RBC Heritage this week.

So he will continue to have a good taste of what it is like playing over there compared to the European Tour, and qualifying for Team Europe via the World Points list might be his best chance of making the Ryder Cup.

Can he win a major? From what we saw of him at the Masters, then yes, I think he can. His first appearance at Augusta National has been another part of the huge learning process for him, and it was a test he passed with flying colours.