Shane Lowry is just a shot off the lead heading into the final round of the RBC Heritage, with Tommy Fleetwood also in contention as he chases a maiden PGA Tour victory.

Lowry mixed eight birdies with two bogeys on his way to a six-under 65 at Harbour Town Golf Links, lifting him to 10 under and a three-way tie for second, as Harold Varner III carded a round-of-the-day 63 to take a narrow advantage into Sunday.

Varner birdied four of his opening six holes and followed further birdies at the ninth and 12th with back-to-back gains from the 15th, bolstering his hopes of a breakthrough PGA Tour victory, with Lowry joined a stroke behind by Patrick Cantlay and Erik van Rooyen.

"Without complaining too much, 65 is the worst score I could have shot," Lowry said. "I hit the ball unbelievable today, and I didn't really hole anything. That putt on the last is probably as long as I've holed all day.

"It was getting quite frustrating for a while, but I hit it in pretty close a couple of times and made a couple of nice birdies. It was really nice to birdie the last and get myself into double digits for the tournament."

Lowry took advantage of the par-five second but missed a three-footer to save par at the next, with the Irishman then following back-to-back birdies from the fourth by two-putting from five feet and bogeying the sixth.

The 2019 Champion Golfer responded to squandering another birdie chance from eight feet at the seventh by picking up a shot at the next and reaching the turn in 34, with Lowry starting his back nine with successive birdies before adding further gains at the par-five 15th and the par-four last.

Van Rooyen signed for a bogey-free 67 and Cantlay birdied his final hole to salvage a one-under 70 and also get within one of the lead, with Austria's Sepp Straka in tied-fifth alongside Australian trio Matt Kuchar, Aaron Wise and Hudson Swafford.

Fleetwood birdied two of his opening four holes and rolled in from 15 feet at the seventh, with the Englishman posting consecutive birdies from the tenth and then drained a 50-foot putt from off the 14th green.

The 31-year-old then added another at the next to move to eight under, with Jordan Spieth - who missed an 18-inch putt on the final green - Billy Horschel and Joel Dahmen completing the group three strokes off the pace. 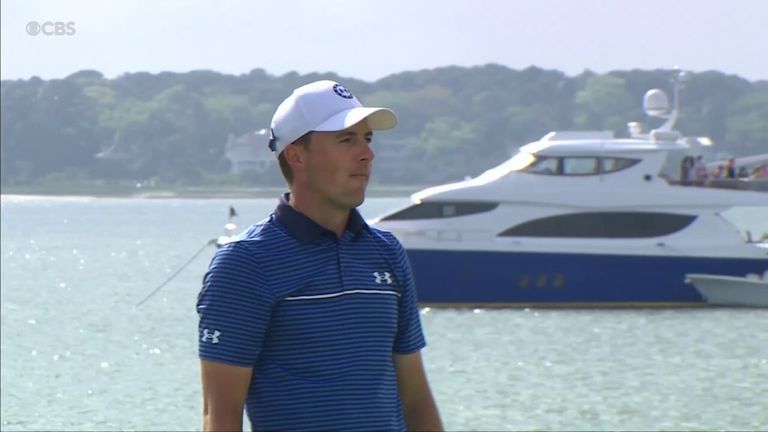 "I never felt like I was playing particularly great," Fleetwood said. "I never felt comfortable in my swing. Like I haven't played well this week. But today was the day where I had nothing destructive in there.

"If I missed a shot, it was like a skanky one that would be in place somewhere and then I had a chance to go from there. I putted really, really well. It was just that I literally made zero mistakes, and then had a few good shots where then I capitalized on it."

Three birdies in a four-hole stretch from the 12th lifted Ian Poulter within four of the lead and in tied-13th, while Graeme McDowell moved inside the top-30 with a bogey-free 66.

World No 2 Collin Morikawa is seven behind on four under and Justin Thomas posted a one-under 70 to drop to tied-56th, with defending champion Stewart Cink second bottom of those who made the cut after a level-par 71.

Who will win the RBC Heritage? Watch the final round live on Sunday on Sky Sports Golf. Live coverage begins with Featured Groups from 1.30pm, ahead of full coverage from 6pm.