Brandon Wu and Tony Finau apply late pressure to Jon Rahm at the Mexico Open but the world No 2 from Spain edged ahead with a birdie at the 14th before closing with four successive pars to remain out in front; Kurt Kitayama also shares second after triple-bogey costs Cameron Champ 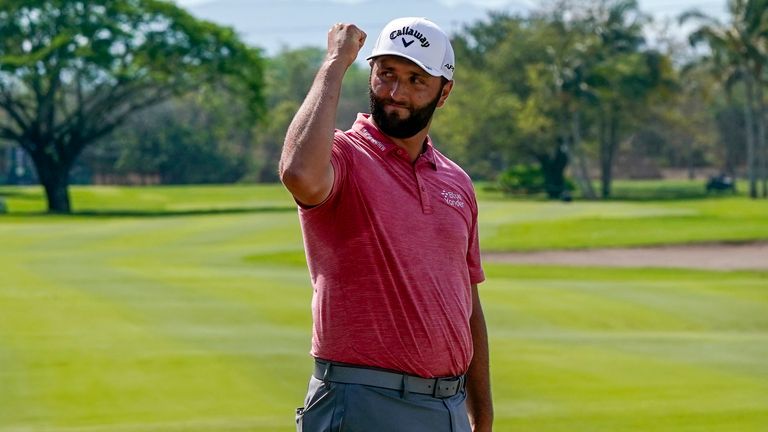 Jon Rahm carded a two-under 69 in the final round to secure a one-shot victory in the Mexico Open at Vidanta Vallarta.

The 27-year-old Spaniard held off late charges from American duo Tony Finau and Brandon Wu to finish on 17-under 267 and claim his seventh PGA Tour title.

Finau and Wu closed with eight-under 63s but had to settle for second place alongside compatriot Kurt Kitayama after Rahm held firm under pressure in the closing stages. World No 2 Rahm started the day with a two-shot cushion over Kitayama and Cameron Champ but five successive pars to open his round saw his advantage halved by early birdies from the American pair.

The Spaniard, who was playing steady, risk-free golf out in front, produced a couple of superb iron shots to notch back-to-back birdies at the sixth and seventh, although these were matched by Kitayama and Champ.

The wheels fell off for Champ at the eighth, though, as he pushed his tee shot right to the water's edge, from where he hacked out and then hooked his third left of the green on his way to a triple-bogey seven.

Kitayama faltered when he found water off the 10th tee for the third day in a row, leading to a bogey, which Rahm matched after missing from inside six feet for only the second time this week.

Meanwhile, Wu, who had eagled the sixth, was making rapid progress up the leaderboard and he joined Rahm in the lead on 16 under when he rolled in a 25-foot putt at the 16th for his sixth birdie of the day.

Kitayama then made it a three-way tie for the lead with a birdie at the par-five 12 - where Rahm could only make a par - despite a wayward third shot.

Finau also put himself in the mix when he followed up an eagle at the 14th, holing a 56-foot putt from off the front of the green, with a birdie at the next to get to 15 under, but he then missed birdie chances at the next two holes.

Wu failed to add another birdie over the final two holes but his eight-under 63 - the competitive course record - set the clubhouse target of 16 under for those in behind.

His score and total was quickly matched by Finau as he birdied the last - playing the final six holes in six under - to secure his first top-10 finish of the season.

The wind was now blowing strongly to further trouble the later starters, but Rahm had the answer at the 14th as he drained a welcome birdie putt to retake the outright lead on 17 under, as Kitayama bogeyed the hole after pulling his second shot left to slip two behind.

Rahm then parred the 15th,16th and 17th - missing a decent birdie chance at the latter after an excellent tee shot - before securing the victory with another steady par at the last after driving into the left rough.

"It was a pretty stressful weekend all the way to the end," said Rahm, whose previous win came back at the 2021 US Open. "I didn't think having a par-five [18th] where a fade off the tee was required I would be stressing this much, but I got it done at the end.

"I let my frustrations out a few times out there but I stayed positive and hopeful and I think it showed in my swings. It wasn't my best putting weekend but I stayed aggressive and I think the shot on 17 showed that.

"I was confident in what I was doing, I had faith in every part of my game. A couple of those great par putts early on helped out a lot and the one putt from outside five feet that finally went in on 14 was a huge booster."

England's Aaron Rai closed with a one-over 72 to finish in a tie for 24th on nine under, with Graeme McDowell of Northern Ireland two back on seven under in joint-33rd following a round of 68.