American Palmer is tied with England's David Skinns - who carded a career-low 63 on Friday - and first-round leader, Sebastian Munoz of Colombia, who made PGA Tour history with an opening-round 60; watch AT&T Byron Nelson this week, live on Sky Sports Golf 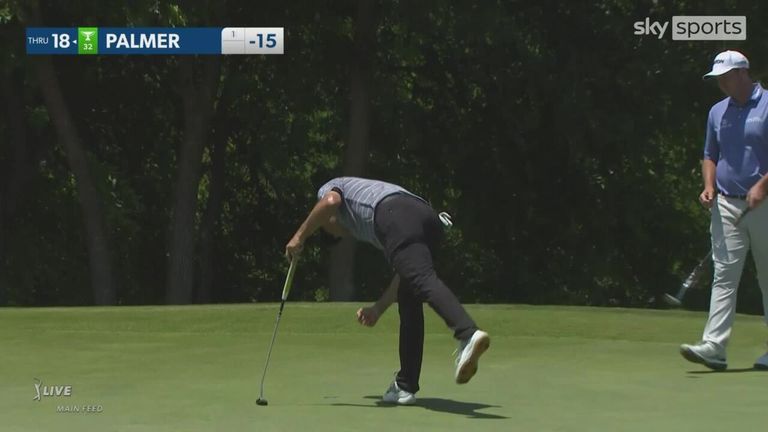 Ryan Palmer shot the low score of the second round, firing a 62 on Friday to join a three-way tie atop the 36-hole leaderboard at the AT&T Byron Nelson in Texas.

The 45-year-old American, who last won an individual PGA event in 2010 at the Sony Open in Hawaii, was flawless in his 10-birdie, bogey-free performance that shot him up to 15-under at TPC Craig Ranch.

In a field where 19 players are at 10 under or better through two rounds, Palmer is tied with England's David Skinns - who carded a career-low 63 on Friday - and first-round leader, Sebastian Munoz of Colombia, who scored a 69 one day after making PGA Tour history with a blistering 60 in his opening round.

Tour rookie Justin Lower sits in fourth, his best position after any career round, one stroke back after a second-round 66. He is followed by South Africa's Charl Schwartzel (65) at 13 under.

Palmer, a native of Amarillo, Texas, began play on the back nine and ignited with a six-birdie stretch over seven holes, starting on the par-5 12th hole.

He finished with a flourish with another four birdies on the front, holes 3, 5 and 6, as well as his final one of the day at 9. The round was one off his career best (61 in the second round of the 2015 Humana Challenge).

"Today was a matter of knowing you had to shoot low, put up a good number just to stay within striking distance," Palmer said. "You never know when you're going to catch lightning like that, and to make 10 birdies today is an awesome feeling, especially in front of some fans and some friends and family.

"So I love where we're at, love what [caddie] Randy Smith and I are doing and some of the best putting I've been doing as well."

Tour rookie Skinns, 40, also tallied 10 birdies and his only blemish - a bogey on the par-4 6th hole - kept him from holding the outright tournament lead.

"I drove it well yesterday and I felt like I could do the same again today and I did and I got in a nice run there in the middle where I believe I made five in a row, which it's one of them where you just - you're feeling it," Skinns said, crediting a driver change on Wednesday for his scorching play thus far.

Despite falling back to the top of the pack Friday, Munoz rescued his round with four birdies on the front after a 1-over back nine to begin his round. The 29-year-old is searching for his second career PGA win.

Spieth, meanwhile, is looking to win his second-straight tournament in as many starts after taking April's RBC Heritage in a playoff. The 13-time PGA winner delivered eight birdies and one bogey on Friday.

Scottie Scheffler, first in the latest world rankings, is among an eight-pack of players at 9-under after a 68 on Friday. He was hurt by a triple-bogey 7 on No 13.

The 5-under cut line equals the PGA's lowest of the season, with 13 players going home on Friday despite 4-under scores.