Spieth a shot behind Munoz and Thomas within three of the lead after a bogey-free 64, while England's David Skinn dropped out of contention with a third-round 74; Watch live on Sunday from 6pm on Sky Sports Golf 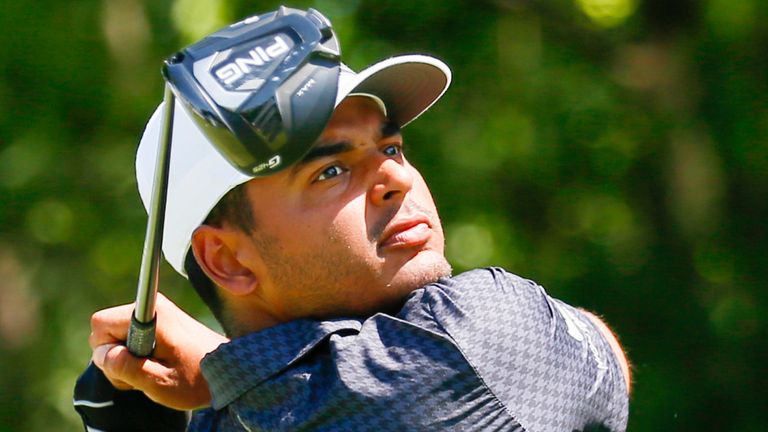 Sebastian Munoz takes a one-shot lead into the final round of the AT&T Byron Nelson, with Jordan Spieth and Justin Thomas both in contention after another low-scoring day in Texas.

Munoz mixed an eagle and five birdies with a lone bogey to card a six-under 66 at TPC Craig Ranch and move to 21 under, a shot clear of Spieth, keeping the Colombian in pole position to challenge for a first PGA Tour victory since 2019.

Chile's Joaquin Niemann is two strokes back in third after back-to-back 65s, while a round-of-the-day 61 from James Hahn lifted him to tied-fourth and 18 under alongside Thomas.

"I'm just really pleased, I've been very patient this year," Spieth said. "I felt like my game's been in a better place than last year and I didn't really have anything to show for it other than a second at Pebble. I feel some momentum for sure, but I do feel like I still got some parts of my game that actually need to sharpen a little bit."

Heading into the weekend tied for the lead, Munoz followed a 40-foot birdie at the second with a hole-out eagle from a greenside bunker at the driveable sixth hole to pull ahead of a congested leaderboard.

Munoz took advantage of the par-five ninth for the first of back-to-back birdies and added further gains at the 12th and 14th, although he saw his lead cut to a single stroke when he bogeyed the 16th and failed to convert a nine-foot birdie opportunity at the par-five last.

Spieth holed a long-range birdie at the third and charged up the leaderboard with five birdies in a six-hole stretch from the fifth, with two-putt birdies at the 12th and 14th taking him to 20 under with four holes to play.

The three-time major champion, who will have a chance to complete the career Grand Slam at the PGA Championship next week, missed a seven-footer to save par at the short 15th but birdied the last to ensure a place in the final group on Sunday.

Hahn made his charge with five birdies in six holes from the fourth and played a four-hole stretch in five under from the 12th, briefly raising hopes of a possible '59 round', although he had to settle for an 11-under 61 after a final-hole gain.

Thomas remains in the hunt for a first win since the players after a bogey-free 65, while Charl Schwartzel is in tied-sixth on 17 under alongside K.H Lee and Ryan Palmer.

World No 1 Scottie Scheffler is in the group tied ninth and Ireland's Seamus Power is tied-18th after a three-under 69, as England's overnight co-leader David Skinns dropped out of the top-20 after a two-over 74.