Brooks Koepka to join Saudi-backed series; Koepka has removed all references to the PGA Tour from his social media; Koepka to play in second LIV event next week; Collin Morikawa says he's 'here to stay' on PGA Tour; US Open champion Matt Fitzpatrick 'not concerned' by defectors

Sky Sports News understands that the four-time major winner - who has removed all references to the PGA Tour from his social media profiles - will tee it up in the second event in Portland next week.

The 32-year-old is set to become the latest big name to join the controversial series, following Dustin Johnson, Bryson DeChambeau and Phil Mickelson, but world No 4 Collin Morikawa has denied talk that he's next to follow in their footsteps.

The two-time major winner, and defending Open champion, tweeted on Tuesday: "To state for the record, once again, you all are absolutely wrong. I've said it since February at Riviera that I'm here to stay on the @PGATOUR and nothing has changed."

Newly-crowned US Open champion Matt Fitzpatrick has also reiterated his commitment to the PGA Tour and DP World Tour, saying he was "not really concerned" about the current list of defectors.

"I think whenever you've got Justin Thomas, Rory McIlroy - I saw Collin Morikawa's come out and made a statement today - Scottie Scheffler, I feel like you've got some great players there," Fitzpatrick said.

"For me, they're more than good enough to compete with any rival tour that might want to try and take hold of golf. I'm not really concerned about it.

"I think the Tour's not going anywhere and as long as they've got Tiger Woods' support and Rory's support, Justin Thomas, there'll be no issues in my opinion."

Koepka was asked about defecting prior to last week's US Open and gave a tetchy response about why he had seemingly decided to stay on the PGA Tour. He said: "There's been no other option to this point, so where else are you going to go?"

When the reporter pointed out that the LIV events had started, Koepka added: "As of last week. That's it. I wasn't playing last week."

He added: "I'm here. I'm here at the US Open. I'm ready to play US Open and I think it kind of sucks, too, you are all throwing this black cloud over the US Open. It's one of my favourite events. I don't know why you guys keep doing that.

"The more legs you give it, the more you keep talking about it."

LIV also announced on Tuesday that world ranked No 20 Abraham Ancer has signed and will compete in his first event at the LIV Golf Invitational Portland.

It was announced earlier this month any players involved in the LIV Series would be indefinitely suspended from the PGA Tour.

A letter confirming that was sent to PGA Tour members by commissioner Jay Monahan shortly after the opening LIV Golf tournament got under way at Centurion Club in Hertfordshire on June 9.

The total prize fund across the initial eight LIV events is £200m, with Charl Schwartzel scooping £3.86m when he won the inaugural 54-hole competition at Centurion Club - nearly three times the figure he claimed for his major success at the Masters in 2011. 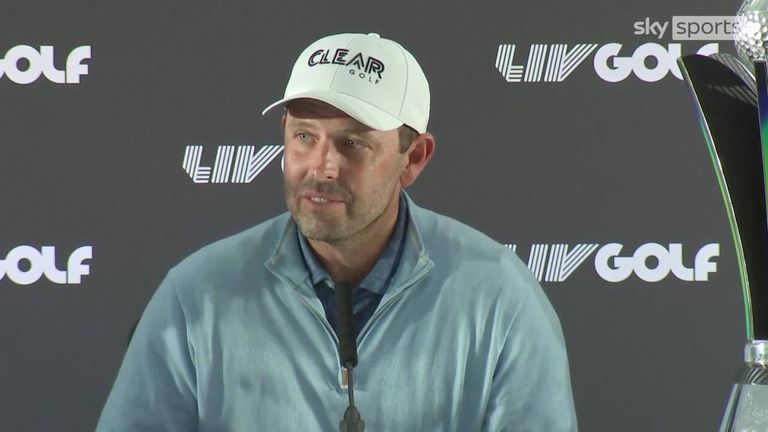 Schwartzel and runner-up Henni Du Plessis were both part of Stinger GC, who won the team competition alongside Branden Grace and Louis Oosthuizen, with the quartet all earning an additional $750,000 share of the $3million team first prize.

The controversy of LIV Golf: Explained

Players in the LIV Golf Series have been repeatedly grilled in press conferences about Saudi Arabia's human rights record and whether they are competing in the league solely for monetary reasons.

The breakaway series is backed by Saudi Arabia's Public Investment Fund (PIF) - the owners of Newcastle United - and involves huge sums of money for the competitors.

No official World Golf Ranking points are awarded for LIV events, although CEO Greg Norman says an application will be submitted for that to change.

The inaugural event took place at the Centurion Club last week, with former major winners Dustin Johnson and Phi Mickelson among the 48-man field, while seven more tournaments are scheduled over the coming months.

Pumpkin Ridge GC in Portland from June 30-July 2 and Trump National Golf Club Bedminster from July 29-31 are the next two host venues, with further US-based tournaments taking place in Boston from September 2-4 and Chicago from September 16-18.

Stonehill Golf Club in Bangkok is the venue from October 7-9 and Royal Greens Golf Club - the site of the Saudi International in recent years - hosts the following week, with the season-ending Team Championship then hosted at Trump National Doral Miami from October 27-30.