Si Woo Kim and JJ Spaun kicked off the FedEx Cup Playoffs in style, shooting matching eight-under 62s to share the first-round lead on Thursday at the FedEx St. Jude Championship in Memphis; Northern Irishman Rory McIlroy fell behind with an even-par 70 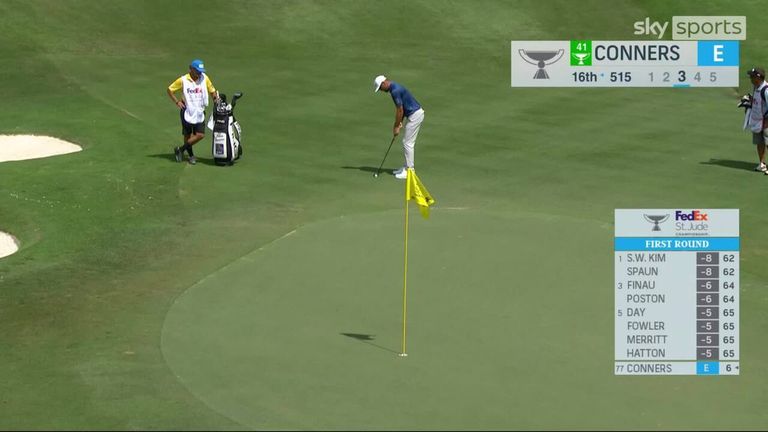 Two-time FedEx Cup champion Rory McIlroy fell eight strokes off the pace as Si Woo Kim carded an eight-under 62 to snatch a share of the lead with JJ Spaun.

South Korean Kim admitted to being "excited" to pull off a "perfect" shot, after he holed out from 167 yards on the par-four 18th to cap a strong finish of six-under on his last six holes, the first of three play-off events.

His American co-leader, meanwhile, had eight birdies at TPC Southwind in Memphis as he said it was "hot out here".

"I think I putted really well and I drove it really well. I guess I hit 15 out of 18 greens, so that's a pretty good combo. When you're hitting a lot of greens and putting well and hitting fairways, it's hard to complain about how I played today."

Spaun's compatriot Sahith Theegala was at seven-under followed by a group of four including Tony Finau a further shot back, while England's Tyrrell Hatton was at five-under.

Northern Irishman McIlroy carded an even-par 70, along with Scotland's Russell Knox, to be eight strokes off the pace.

World No 1 Scottie Scheffler and Will Zalatoris also struggled to one-over 71s.

The St Jude is the new first leg of the FedEx Cup Playoffs. The top 125 players in the regular-season points standings qualified (120 are playing), and only the top 70 after this week will advance to the second leg, the BMW Championship.

Watch the FedExCup Playoffs - live on Sky Sports. Coverage continues at the FedEx St Jude Championship on Friday from 12pm and 6pm on Sky Sports Golf.