Rory McIlroy began the week with a 68 at Carnoustie, as did Francesco Molinari on his return to the venue where he won The Open in 2018: Watch the Alfred Dunhill Links Championship live on Friday from 11am on Sky Sports Golf 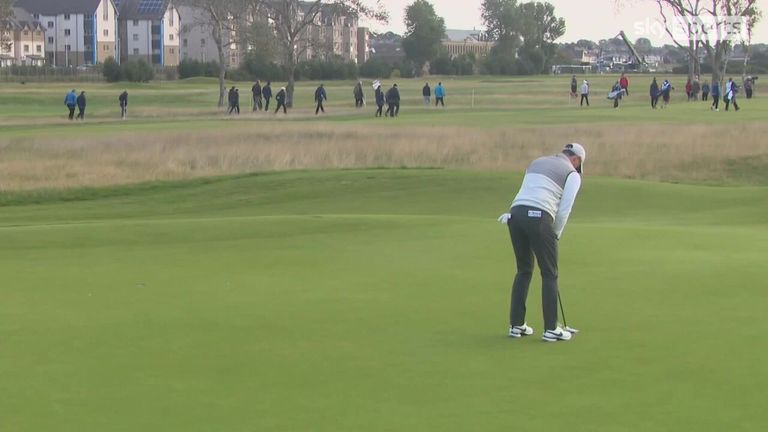 Romain Langasque produced a remarkable finish to equal the course record at St Andrews and grab the early lead at the Alfred Dunhill Links Championship.

The Frenchman made an eagle and five birdies over his last six holes to close an 11-under 61 on the Old Course, one of three being used in the event, to sit a shot ahead of compatriot Fredric Lacroix.

Langasque - beginning on the back nine - failed to get up and down from off the green to save par at the 11th but rolled in a 50-foot eagle after driving the green at the par-four next, then took advantage of the par-five 14th and made a close-range birdie at the 18th to turn in 33.

Birdies at the second and fourth were followed by a 40-foot eagle at the par-five fifth, before Langasque birdied each of his final four holes to complete a second-nine 28 and jump top of the leaderboard.

"I'm so happy, the last three holes were really fun and I made long putts," Langasque said. "It's amazing. I didn't realise that I have the course record here now and I think it's something I will remember for the rest of my life."

Lacroix's effort came at Kingsbarns, where Niklas Norgaard Moller carded a nine-under 63 to join Antoine Rozner - playing at St Andrews - in a share of third.

A seven-under 65 from Thomas Pieters was the lowest round of the day at Carnoustie and left the Belgian in tied-seventh after a low-scoring opening day, while England's Daniel Gavins also sits four back after his bogey-free start at St Andrews.

"Obviously played the back nine very well and then yeah, sort of stalled a little bit," McIlroy said. "I made a couple of bad swings coming in, led to the bogey on three and then ended up making a decent bogey on nine after a bad tee shot.

"Overall, you're not going to get Carnoustie in easier conditions, so feel like I left a few shots out there. But overall it was a decent day."

Due to heavy rain and strong winds being forecast for Friday, the second round will be played under a shotgun start at 8.30am on all three courses. Leader Langasque will be tackling Carnoustie on day two.

Watch the Alfred Dunhill Links Championship throughout the week live on Sky Sports. Live coverage continues Friday from the earlier time of 11am on Sky Sports Golf.