Matt Fitzpatrick and Tyrrell Hatton hold a share of the halfway lead in Dubai; DP World Tour rankings leader Rory McIlroy is seven back after a final-hole eagle Watch the DP World Tour Championship live on Saturday from 5am on Sky Sports Golf 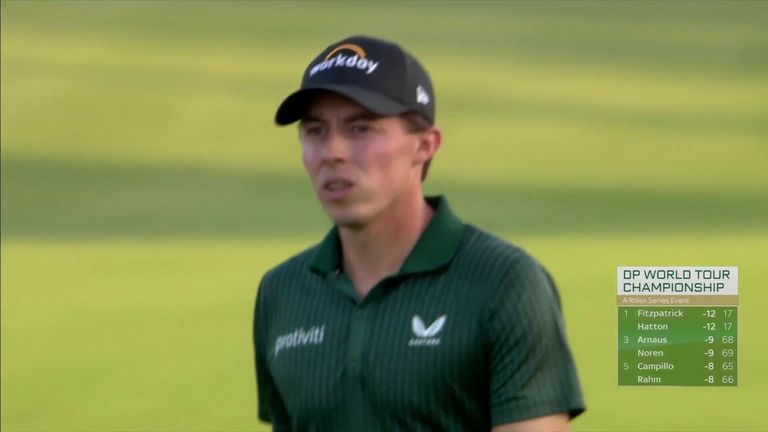 Matt Fitzpatrick and Tyrrell Hatton retained a a share of the lead at the halfway stage of the DP World Tour Championship, as Rory McIlroy stayed in contention after a brilliant finish to his second round in Dubai.

The English pair both carded second-round 67s at Jumeriah Golf Estates to move to 12 under and three clear of the chasing pack, with Adri Arnaus and Alex Noren in tied-third ahead of Spanish duo Jon Rahm and Jorge Campillo.

A fast start to the day saw Hatton open a three-shot lead before Fitzpatrick reined him in and briefly took the lead in the closing stages after three birdies in a four-hole stretch. 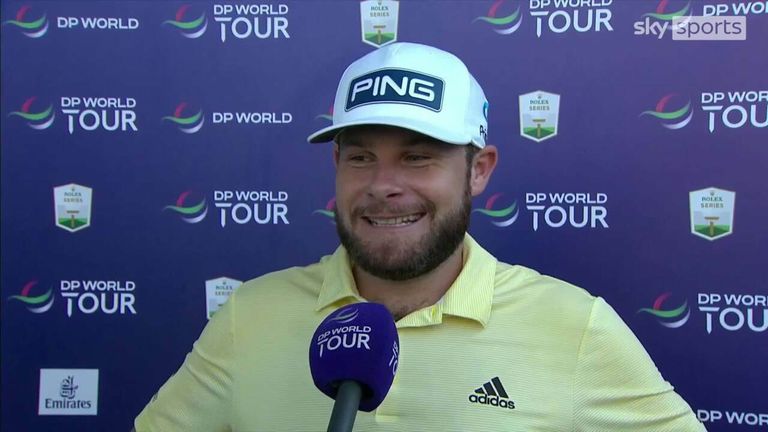 Hatton holed a 20-foot birdie at the par-three 17th to regain a share of first place, but there was late drama on the last hole after disappointing tee shots left the co-leaders with decisions to make.

Hatton chose to take a drop after his ball landed in the penalty area and recovered well to find par, two-putting from 30 feet, while Fitzpatrick also finished with a five after played his second shot from the trees.

Fitzpatrick went into this week's season finale third on the DP World Tour Rankings and leads the projected standings ahead of Rory McIlroy and Ryan Fox with 36 holes remaining.

"Really, really pleased with the way I played again," Fitzpatrick said. "And yeah, scored really well too. It was a good day. Just got to keep pushing on, just keep playing how I feel like I'm playing right now. "I feel really comfortable with where my game is at, particularly after three weeks off, and looking forward to the weekend. I feel like I've played two good rounds to start with and put myself in position and I'll just keep doing more of the same and see where it gets me come Sunday."

McIlroy was level par after 15 holes of his second round and just one under for the tournament before making birdies on the 16th and 17th and a brilliant eagle on the par-five 18th.

The resulting 68 left the world No 1 on five under and seven off the halfway lead, with McIlroy admitting the eagle finish had changed his mindset going into the weekend.

"Yeah, 100 per cent," McIlroy said. ""Pretty mediocre golf for the first 33 holes, and then something sort of clicked. Whatever it is, I need to bottle it for the weekend.

"It was nice to finish with a flourish there and put myself a little closer to the guys. You never know, that finish here on Friday could be key to something that happens over the next 36 holes."

McIlroy and Fox can claim the Harry Vardon trophy with an outright victory in Dubai, which is awarded to whoever finishes top of the season-long DP World Rankings after the conclusion of this week's event.

Fox sits on one over and in tied-37th after rounds of 73 and 72 over the first two days, while Shane Lowry - one of seven players starting the week with a mathematical chance of ending the season top of the DP World Tour rankings - in a share of 24th after a two-under 70.

Watch the DP World Tour Championship throughout the week live on Sky Sports. Live coverage continues Saturday from 5am on Sky Sports Golf.