DP World Tour: Rory McIlroy believes he is 'as complete a golfer as ever' after securing European No 1

Rory McIlroy finished the year as European No 1 for the fourth time in his career - and first since 2015 - with a fourth-place finish at the DP World Tour Championship; McIlroy also won the PGA Tour's FedExCup earlier in the year

World No 1 Rory McIlroy believes he is "as complete a golfer as ever" after signing off his stellar 2022 campaign top of the DP World Tour rankings for a fourth time.

McIlroy finished the year as European No 1 for the first time since 2015 after his fourth-place finish at the season-ending DP World Tour Championship in Dubai, where Jon Rahm claimed a two-shot victory.

The Northern Irishman has been no worse than 12th in all 10 appearances on the DP World Tour this season, including top-eight finishes in all four majors, with McIlroy the first player since Henrik Stenson to win the FedExCup and the Harry Vardon Trophy in the same year.

"It [being European No 1] means a lot," McIlroy said. "It has been seven years since I've last done it. Obviously, this is my fourth one but it's been a while. I've won three FedExCups since the last time I won, which was The Race to Dubai back then.

"I was a model of consistency the whole way through the year. A lot of top finishes. A really consistent season putting in good performances.

"Would have been nice to get one win in there at the end of the year here, but Jon [Rahm] obviously played an incredible tournament and fully deserved it. I'm really proud of my year and excited for 2023."

McIlroy has been back to his consistent best in recent months on both the PGA Tour and the DP World Tour, posting top-eight finishes in 13 of his last 16 worldwide starts, having struggled with form and consistency during the early part of the year.

"I think one of the things I'm really proud of over the last few years is I don't feel I have to rely on one aspect of my game," McIlroy said. "I think if my driving isn't there, then my putter bails me out.

"If my putter isn't there, my iron play bails me out. I feel like when you get to this level it's like, okay, how can you make those incremental improvements to get better? I think my goal has been to just become a more complete golfer and I feel like I'm on the journey to doing that.

"I'm as complete a golfer as I feel like I've ever been, and hopefully I can continue on that path."

Rahm: "People can stop telling me it was a bad year!"

Jon Rahm's two-shot victory over England's Tyrrell Hatton and Sweden's Alex Noren was his third in six years at Jumeirah Golf Estates, following victories in 2017 and 2019, with the win lifting the Spaniard to third in the season-long standings.

Rahm's victory follows his success at the Acciona Open de Espana in October and the Mexico Open victory on the PGA Tour earlier in the campaign, with the former US Open champion proud of his 2022 performance. 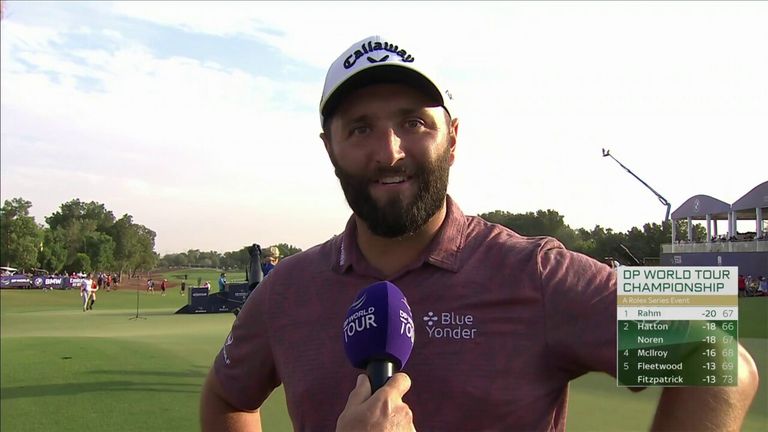 "Because of Covid-19, I never got a chance to defend my 2019 title and even though I decided not to come last year, I came with the mentality that, well, nobody beat me in the last two years, so they are going to have to beat me again," Rahm said. "Came in with that confidence.

"You know, a lot of similarities to the past. Last time I won here I started at 15 under, had a heck of a front nine, and shot 20 under as well to win it. I like this course and this course likes me. I hope this is third of many more.

"Hopefully people can stop telling me that it was a bad year. Three wins worldwide and three wins in three different continents. Yeah, it wasn't a major championship but it's still a really, really good season."