By Keith Jackson at Augusta National

Sergio Garcia admitted he had accepted the possibility that he might end his career without a major as he celebrated a stunning victory at the Masters.

Garcia hit the headlines at Augusta National five years ago when he finished in a tie for 12th and declared that he was "not good enough" to win a major, but a more positive attitude drove him to a dramatic play-off win over Justin Rose at the first hole of a play-off.

The Spaniard led Rose by three after five holes on Sunday, but he looked to be heading for another near-miss when he bogeyed the 10th and 11th to slip two strokes behind following a run of three straight birdies from the Englishman.

But Garcia dug deep and produced a clutch par save at the 13th after pulling his drive into the shrubbery, and he followed a birdie at 14 with a superb eagle at the next to regain a share of the lead.

The pair remained tied for the lead heading down the last, and Garcia missed a six-foot putt to win in regulation before atoning with a birdie at the first extra hole after Rose found trouble off the tee and failed to scramble a par.

"I think the problem was, because where my head was at sometimes, I did think about if I was ever going to win one," said Garcia at his champion's press conference. "I've had so many good chances and either I lost them or someone has done something extraordinary to beat me. So it did cross my mind.

"But lately I've been getting some good help and I've been thinking a little bit different, a little bit more positive, and kind of accepting that if, for whatever reason, it didn't happen, my life is still going to go on - it's not going to be a disaster. But it's happened!

"It's always nice to be recognised or seen as the best player to not have won a major, because at least - 'best player' - there's a good thing there!. So that's the way I looked at it. Well, I don't have to answer that anymore. I don't know if I'll be the best player to have only won one major, but I can live with that." 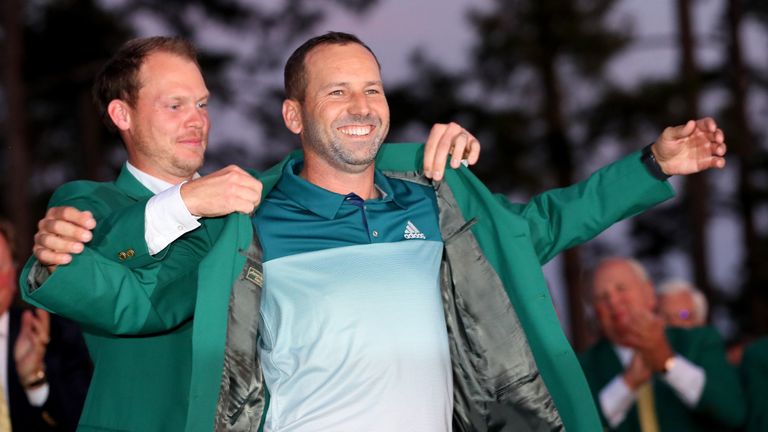 The problem was, because where my head was at sometimes, I did think about if I was ever going to win one

Garcia, who was making his 74th major appearance, also admitted his preference to fade the ball had counted against him at Augusta, but he was full of pride at overcoming the challenge.

He added: "Some of the moments I've had here at Augusta I haven't enjoyed as much, and how stupid I really was trying to fight against something that you can't fight, and how proud I was of accepting things.

"And this week, I've done it better than I've ever had, and because of that, I've looked at the course in a different way throughout the whole week. I'm not going to lie; it's not a golf course that I'm most comfortable in, because I've become more of a fader than a drawer of the ball, and this golf course is asking you to hit a lot of draws.

"But I knew that I could still work it around, you know, if I just accepted what was happening. So I'm very proud of that."

Garcia triumphed on the day that his childhood hero, Seve Ballesteros, would have turned 60, and he was fully aware of the significance as he became the third Spaniard to win the Masters.

"It definitely popped in my mind a few times," he said of the Ballesteros birthday. "There's no doubt about it, and I'm sure he helped a little bit with some of those shots or some of those putts.

"I'm just thrilled to be standing here, it's always a beautiful thing to have. So it's been an amazing week, and I'm going to enjoy it for the rest of my life."