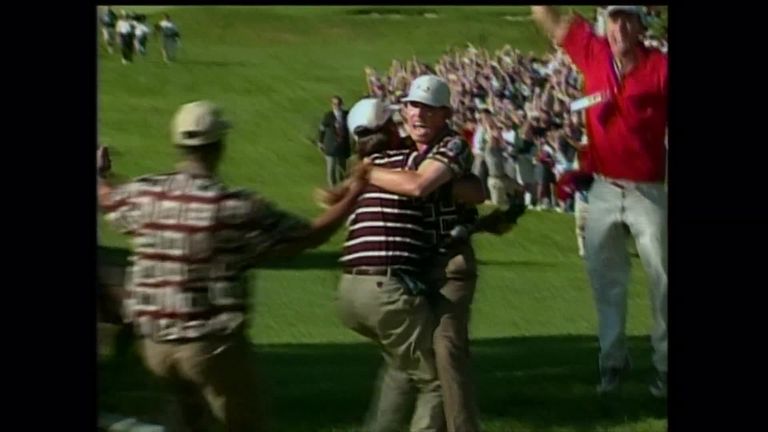 We kick off Ryder Cup week by remembering how Justin Leonard secured a dramatic victory for Team USA in the infamous "Battle of Brookline" in 1999.

The Ryder Cup is coming...

Latest news ahead of the 42nd Ryder Cup at Le Golf National.

America overturned a 10-6 deficit in the Sunday singles to reclaim the trophy, although controversy marred how the hosts claimed the half-point that secured victory.

Team USA won the first six matches of the day and were 14-12 ahead with two matches on the golf course, with Leonard's contest with Jose Maria Olazabal all-square heading to the par-three 17th.

Leonard drained a 45-foot birdie to spark wild celebrations from the American team, with a number of players running on to the green to celebrate before Olazabal made his birdie attempt.

After the green was cleared, Olazabal missed his birdie attempt to leave Leonard one up with one to play, ensuring that American would get at least a half to ensure the trophy returned Stateside.

Watch all three days of the Ryder Cup, live on Sky Sports, as Europe look to regain the trophy...

Click on the video above to see Leonard's iconic putt! Watch the Ryder Cup throughout the week live on Sky Sports' dedicated Ryder Cup channel.