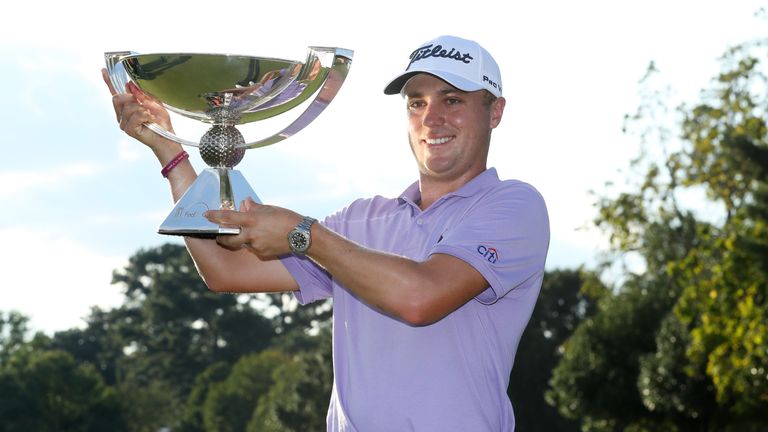 Next year's FedExCup champion will receive a huge $15m bonus as part of sweeping changes to the end-of-season format announced by the PGA Tour.

The overall bonus prize pool for the FedExCup has been increased by $25m to $60m, and there will be added financial incentives for finishing the regular season on top of the standings with the introduction of the Wyndham Rewards Top 10.

The player who tops the standings after the Wyndham Championship will receive a $2m bonus from the extra regular-season pot of $10m, while the Tour Championship will feature a new handicap system benefiting the No 1 ranked player.

The FedExCup Play-Offs will be reduced from four events to three, concluding with the Tour Championship at East Lake in Atlanta at the end of August, while the Dell Technologies Championship has been removed from the schedule.

The top 125 players after the Wyndham Championship will compete in The Northern Trust, with only 70 qualifying for the BMW Championship and the traditional top-30 contesting the Tour Championship.

However, instead of the usual points reset, the FedExCup standings leader will now start the season finale in Atlanta on 10 under par, with the next four players in the rankings starting on eight under as the scores are gradually reduced down to the players ranked 26th to 30th, who commence on level par.

Announcing the changes ahead of this week's Tour Championship, PGA Tour commissioner, Jay Monahan, said: "This is a significant and exciting change for the PGA Tour, our players, our partners and - most importantly - our fans.

"As soon as the Tour Championship begins, any fan - no matter if they've followed the PGA Tour all season or are just tuning in for the final event - can immediately understand what's going on and what's at stake for every single player in the field.

"And, of course, players will know exactly where they stand at all times while in play, which will ratchet up the drama, consequence and volatility of the competition down the stretch.

"Compared to the current system, the beauty here is in the simplicity. Fans are very familiar with golf leaderboards in relation to par, so they will have a clear understanding of the impact every shot makes during the final run for the FedExCup - ultimately leading to a singular champion without conflicting storylines.

"Our players and fans have invested in the FedExCup over the past 12 seasons, and with these enhancements, we are reinvesting in the FedExCup in order to raise the stakes, so to speak, for their benefit.

"We are able to grow and diversify our fan base because we have the best athletes on the planet competing on the PGA Tour. Now is the time to make these changes, and thanks to significant input in the process by our players, partners and fans, I believe we're making exactly the right moves."

Two-time Ryder Cup captain Davis Love, who serves as player director on the PGA Tour's policy board, added: "It has been gratifying to witness the growth, popularity and importance of the FedExCup since its launch in 2007.

"Several important refinements have been made along the way to help accelerate the FedExCup's universal acceptance as a tremendous achievement in professional golf.

"However, I believe this new strokes-based bonus system for the Tour Championship might well be the most important of them all, as it will lend absolute clarity to where everyone in the field stands and what exactly they must do to win the FedExCup. It will make for a very exciting and dramatic four days."