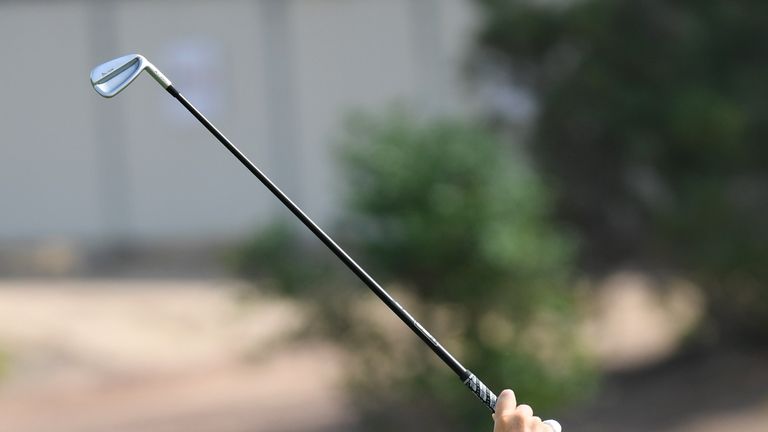 Matt Wallace cruised into the halfway lead in the Betfred British Masters after a classy 67 on another day of low scoring in friendlier conditions for the second round at Hillside.

Wallace's all-round game was again in fine order as he rolled in five birdies and completed 36 holes without a single blemish on his card, closing on 12 under to edge one ahead of a chasing pack featuring several notable British challengers.

European Tour stalwarts Ross Fisher and Richie Ramsay head into the weekend in a share of second along with Thomas Detry and Niklas Lemke, who carded an astonishing eight consecutive birdies during his best-of-the-day 64, while tournament host Tommy Fleetwood and defending champion Eddie Pepperell are just five off the pace.

But Wallace looks the man to beat over the second half of the event following an exemplary display of links golf which has put him in pole position for a fifth victory on Tour since 2017.

The 29-year-old started at the 10th and crafted birdies at both par-fives on the back nine before adding another at the long second shortly before play was suspended due to the threat of lightning.

Wallace refused to be ruffled by the delay and returned to complete a full set of par-five birdies at the fourth, and he converted a sublime approach to five feet at the next before parring in to stay in the outright lead which held up for the remainder of the day.

When reminded that he had yet to make a bogey, Wallace said: "I don't think I've ever done that, especially not to start off a tournament. But it's nice to do that, it's nice to hit fairways and greens, and save yourself when need be.

"My chipping's been really good. My putting, my distance control and my putting has been exceptional. I'm rolling the ball end over end which is really nice and I'm giving myself a lot of chances.

"Hopefully a couple of them will drop but on these greens, there are subtle breaks and they are quite bumpy and might bounce off but I've been rolling it pretty good but who knows. Might make a couple big ones come the weekend."

Lemke was flirting with the cut line when he bogeyed his second hole of the day - the 11th - before he stormed up the leaderboard with his sensational run which began at the 13th, and ended when he had to settled for a disappointing par at the third when another birdie would have equalled the world record for nine in a row.

The Swede picked up one further shot at the sixth which got him into the clubhouse at 11 under, a score later matched by Fisher when he returned a confident 65 which featured eight birdies, including four straight from the second after his lone bogey of the day at the first.

Detry and Ramsay both birdied the final hole to card 67s and join the tie for second, while overnight leader Matthew Jordan could not hit the heights of his course-record 63 on Thursday as he slipped three shots off the lead after an erratic 72.

Veteran Lee Westwood mixed four birdies with two dropped shots in a 70 which kept him inside the top 10 on eight under alongside his 2014 Ryder Cup team-mate Victor Dubuisson (67), while Fleetwood and Pepperell are a further stroke adrift at the halfway stage.

Fleetwood, like Wallace, managed to birdie each of the par-fives while making only one bogey in a solid 69 in which he spurned a series of makeable birdie chances, and Pepperell handed in a bogey-free 67 to keep him firmly in the hunt for a successful defence of his title.