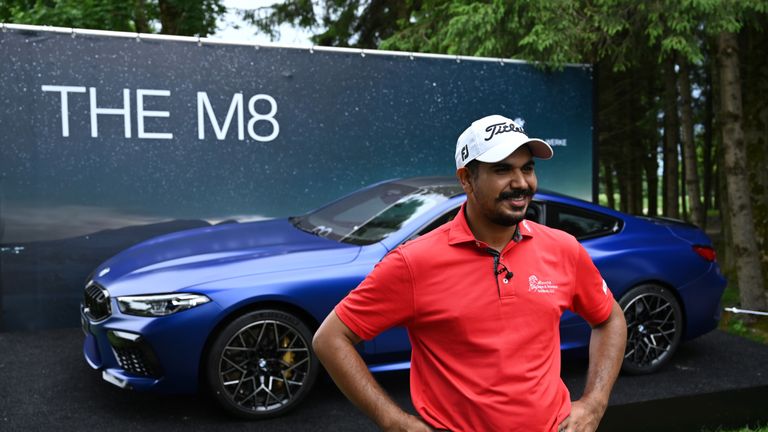 Gaganjeet Bhullar became the proud new owner of a very expensive BMW sports car after he made a sensational hole-in-one during the second round of the BMW International Open.

The luxurious £173,000 BMW M8 Coupe was the prize on offer for an ace on the 17th hole at Golfclub Munchen Eichenried, and it was Bhullar who grabbed the keys after one perfect swing with a six-iron.

The Indian was one under for his second round when he stood on the tee at the tricky 196-yard par-three 17th - his eighth hole of the day - and moments later he was celebrating only the third ace on that hole in the 24 years that the tournament has been held at this venue.

Bhullar's well-struck tee shot pitched softly on the front portion of the green and began to meander fowards, although his ball looked a little short of pace and too far left of the target to threaten the hole.

But it continued to roll out and had just enough momentum to make the distance, taking the left-to-right break and dropping into the side of the cup for the 16th hole-in-one recorded on the European Tour this season.

"This is my second hole-in-one in a professional golf tournament," Bhullar told the European Tour. "Before starting this year, I discussed with my caddie one of my dreams, and I said I need to make at least one hole-in-one and choose the right one. I'm glad we made that commitment.

"It's a great moment. BMWs are some of my favourite cars and I'd love to drive that car."

The magnitude of his achievement perhaps distracted him as he started the front nine with three consecutive bogeys, but he bounced back with a birdie at the fifth and parred safely in to stay at four under - seven adrift of halfway leader Martin Kaymer.

Click on the video above to see Bhullar's magical ace that netted him a luxury BMW sports car in Munich ...