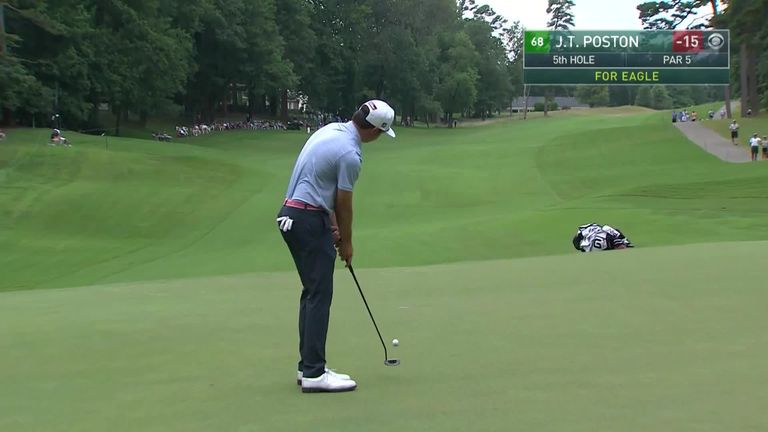 J.T Poston fired a final-round 62 to complete a bogey-free week and secure a maiden PGA Tour title at the Wyndham Championship.

Poston mixed six birdies and an eagle to post the lowest round of the day at Sedgefield Country Club and end the week on 22 under, a shot clear of Webb Simpson.

The world No 164's win makes him only the second player in history to win a 72-hole PGA Tour event without dropping a shot, following on from Lee Trevino at the 1974 Greater New Orleans Open.

Starting the final round three strokes off the lead, Poston made a close-range birdie at the second and holed a 15-foot eagle at the fifth before posting back-to-back gains from the seventh.

Poston converted from 12 feet at the 10th and nudged in a three-footer at the 13th, with the 26-year-old then getting up and down from the greenside bunker at the 15th to make another birdie.

The American closed out his round and bogey-free week with two-putt pars on each of his final three holes, setting the clubhouse target with both Byeong Hun An and Simpson still out on the course.

Simpson surged into contention with three consecutive birdies from the 14th and required a hole-out eagle at the par-four last to force a play-off, but could only stick his approach to 15 feet and make a closing three.

A cancelled out a bogey at the 15th by birdieing the next and needed a final-hole birdie to join Poston on 22 under, only for him to find trees off the tee and card a three-putt bogey from 70 feet.

Overnight leader An finished two strokes off the pace in third ahead of Viktor Hovland, with Si Woo Kim five shots back in fifth place following a blemish-free 64.

Paul Casey slipped out of contention and finished in a share of 13th, while Patrick Reed moved up to tied-22nd thanks to a seven-under 63.