The Presidents Cup was fantastic but, thanks to Patrick Reed and his caddie, there were times I thought I was watching "Dumb and Dumber".

When caddie Kessler Karain went into the crowd to confront a fan towards the end of Saturday's fourballs, the madness of Patrick Reed seven days earlier seemed, by comparison, almost reasonable.

As they say nowadays, what was he thinking?

Maybe he was thinking of Greg Norman 33 years ago when the Aussie legend stormed into the gallery at the US Open and challenged a fan to a car park fight.

Perhaps he was channelling Eric Cantona whose infamous kung fu kick at Selhurst Park in 1995 gave a whole new meaning to the French Connection.

Either way Kessler, you ain't Greg Norman and, unlike Eric Cantona, you don't scare anyone, never mind an Aussie fan with a beer in his hand.

Report and highlights from the Sunday singles at the Presidents Cup.

Maybe best keep your arguments for Twitter or Instagram and let the PGA Tour take care of player security.

Yes, it was admirable for Karain to want to stand up for his brother-in-law Reed when abuse from the Australian galleries was getting louder and more personal. But his ill-conceived venture into the crowd was even more foolish than Reed's attempts to defend his sand-brushing incident the previous weekend in the Bahamas. 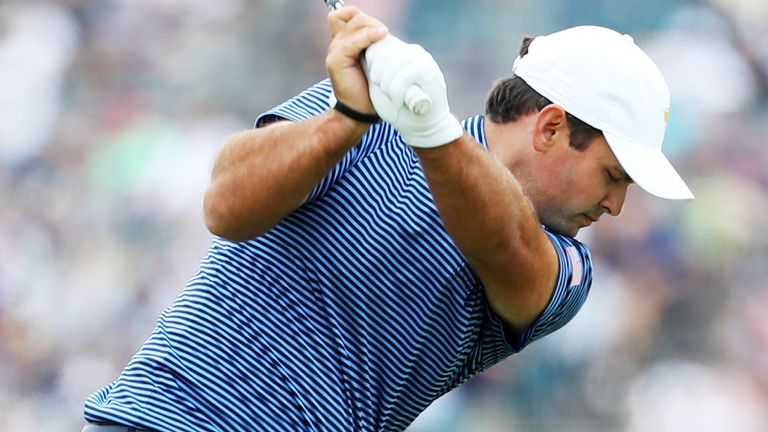 That Reed, himself, had already shamelessly revisited that nonsense with his shovel gesture on day two at Royal Melbourne just goes to support my dumb-and-dumber label.

It would pleasing to think that Reed's wife and Karain's sister, Justine, would get them together and talk some sense into them but it's fair to assume that won't happen.

We should be thankful then that the PGA Tour acted decisively to remove Karain from Reed's bag for the final day, allowing the player to do what he should have been doing all week - playing brilliantly.

His demolition of CT Pan in the singles was the perfect and appropriate riposte to the fans who'd been on his back and Reed should remember that in the future.

I'm sure we all have sympathy for professional sports stars who are subjected to personal abuse but there's no point in meeting wrong with wrong.

Just ask Colin Montgomerie. He took the bait from an American fan at the 1997 US Open at Congressional and started shouting back at the galleries.

It happened during the second round after Monty had led with a 65 on day one. The incident caused him to lose concentration and bogey the next two holes before eventually losing out by one shot to champion Ernie Els. Monty has since said it was one of the biggest regrets of his entire career.

With that in mind, Reed and his brother-in-law should perhaps go home and enjoy a family Christmas where gifts of an anger-management course for Kessler and a golf rule book for Patrick would be ideal.

After that, some New Year resolutions could be in order. For Kessler, the old maxim for caddies to "Show up, keep up, and shut up" could work well. For Patrick, maybe a daily "shush" to the guy he sees in the mirror.

As I've said before, Patrick Reed is good for golf, adding to the rich tapestry of the game, and I'm sure in 2020 we'd all be glad to see another green jacket on his shoulders rather than the perfectly balanced chips weighing him down at the moment.