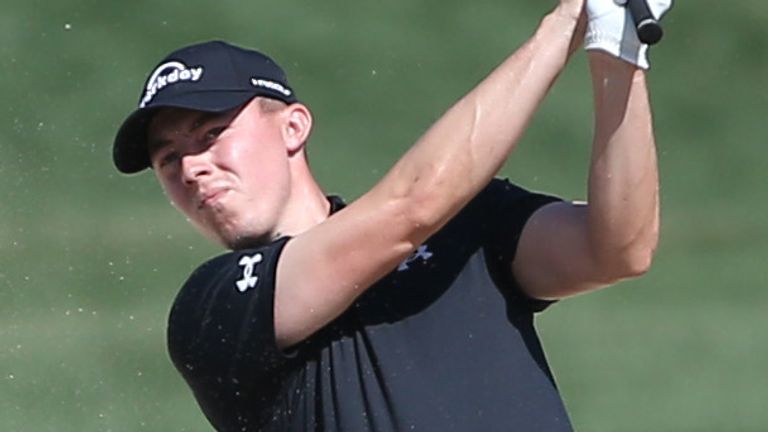 Matt Fitzpatrick admits he would be surprised if many top professionals attempted to copy Bryson DeChambeau's strategy in the quest for more power.

DeChambeau has piled on around three stone in weight over the last nine months, most of it in muscle mass, and the results were evident at the Charles Schwab Challenge as he caught the eye with a number of enormous drives as he looked to overpower the Colonial Country Club layout.

His power increase, giving him an extra 20-30 yards of carry with a driver, almost paid off as he finished just one shot out of the play-off won by Daniel Berger, and former Ryder Cup captain Paul McGinley expressed fears many of his rivals would be happy to trade accuracy for power if it gave them a winning advantage.

"We're very much like sheep as professional golfers, and if we see someone doing something like this with instantaneous results, then we normally follow," McGinley said while analysing the tournament in the Sky Sports studio. "So if Bryson continues with this and has some success, will others be doing something similar?"

But Fitzpatrick told Sky Sports News that he could not see many others going to such drastic lengths.

"Bryson said he was going to do it, and he's done it, so all credit to him for that. It's fair play," said Fitzpatrick, who finished on six under alongside the likes of Rory McIlroy and Brooks Koepka, just outside the top 30.

"He's hitting it miles further as everyone can see, and it is a big advantage. I think it was a shock at how big an advantage it was at Colonial, given that it's a shorter, fiddly kind of golf course.

"But this week will be different. This golf course is really tight and you just cannot overpower it. The are no corners to cut, and you've got to be very accurate bar a couple of par-fives that he will look to take advantage of.

"He's done it for a reason and I'm sure he believes in it. But I'd be shocked if anyone else did it. No disrespect to Bryson, he's put on some serious size, it looks like the width of his back has increased by about five feet!

"He's a different animal now, but I can't see any other golfers going to that length. You certainly won't see me packing in 6,000 calories per day!"

Fitzpatrick also insisted he was not unduly affected by the absence of spectators at Colonial, although he did feel the lack of atmosphere it was tough for the main contenders, particularly coming down the stretch on Sunday.

"It felt pretty normal, just minus the fans," he added. "I was around the middle of the field all week so the fans wouldn't have impacted me much anyway, there wouldn't have been too many watching.

"But for the guys who were leading, I'm sure it made a big difference. When you're holing those clutch putts coming down the stretch, and it's just silent, it's very strange. I think we'll get used to it in time, but the sooner we can get the fans back, the better.

"As soon as we teed off it was fine. It was kind of no different to playing golf with your mates, I guess. It was pretty easy, and actually quite nice to have a bit of silence while you're playing.

"I did watch the play-off and I saw Collin miss that putt, and I have to admit it was all pretty flat. Normally you'd have a big crowd there watching the conclusion, and even when someone misses a short putt like that, there would be a big reaction.

"And it was awkward for Daniel in a way, winning in silence, no handshakes, no hugs. That was tough. You often feel like you can feed off the crowd, you make birdie and you feel the lift that it gives you, particularly coming down the stretch. I've felt that when I've been lucky enough to win on the European Tour.

"That does make a difference for sure. I don't think I could put a number on it, but the crowd can give you that extra confidence boost, knowing they're behind you and supporting you."