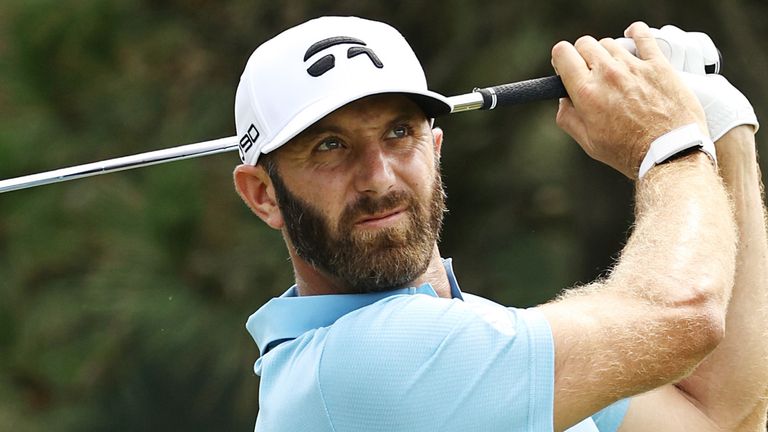 The top shots and key moments from the final round of the Travelers Championship as Dustin Johnson clinched his first PGA Tour title in over 16 months.

Dustin Johnson produced some outstanding putting and enjoyed a few moments of good fortune as he clinched his first win in over 16 months at the Travelers Championship.

Johnson's final-round 67 was just enough to hold off Kevin Streelman at TPC River Highlands, where overnight leader Brendon Todd parred the first 11 holes before his challenge derailed with a triple-bogey seven at an expensive 12th hole.

Todd, two clear after 54 holes, suddenly found himself two behind when Johnson made his fifth birdie in a high-quality seven-hole stretch at the 10th, and his problems began when his approach to the 12th from the middle of the fairway came up short and right.

His ball buried deep in the bank of a bunker, Todd shanked his pitch and then came up short with an ambitious flop-shot before a putt up the slope also lacked the pace to reach the putting surface.

Todd's hopes of becoming the first player to win three times on the PGA Tour this season were effectively over after the resulting triple-bogey, although Johnson then made a big error at the next when he pulled his drive out of bounds.

The former world No 1 did well to roll in a seven-foot putt to limit the damage to a bogey-six, but he bounced back immediately with another perfect putt from 15 feet for birdie at 14, where Todd dropped another shot to tumble out of the top 10.

Johnson then looked certain to drop at least one shot on the driveable par-four 15th, when another tugged tee shot was heading for the water hazard only for his ball to pitch, dig in and cling onto the grassy bank beside the lake.

He pitched onto the front of the green while stood in the hazard and safely two-putted for par, but he was then heading back to the clubhouse with the rest of the field still on course after the klaxons sounded to alert the threat of lightning in the area.

However, the suspension in play lasted only an hour, after which Johnson promptly dumped a seven-iron into sand at the short 16th, played a poor bunker escape and the resulting bogey meant his lead had been whittled down to a single shot by Streelman, who had completed 17 holes in three under par and without a bogey on his card.

But the 2014 champion was unable to bogey the last as he settled for a 67 and the clubhouse lead on 18 under, leaving Johnson needing just a par to win for the first time since the WGC-Mexico Championship in February last year.

Johnson resisted the urge to play cautiously and hammered his final drive over 350 yards down the fairway, flicked a wedge to the heart of the green and two-putted for the winning par and a one-shot victory over Streelman, with Will Gordon (64) and Mackenzie Hughes (67) sharing third on 17 under.

Former US Open champion Johnson has now collected 21 PGA Tour titles, and at least one every year since 2008, a record he was proud and relieved to have continued in Connecticut after a barren run of results over the last few months.

Big-hitting Bryson DeChambeau was unable to mount a serious threat over the final 18 holes as he signed off with a 68 to finish tied for sixth on 15 under, while Rory McIlroy was again frustrated by further "stupid mistakes" that have hampered him throughout the tournament.

The world No 1, who started Sunday eight behind after he bogeyed two of the last four holes on Saturday, raised hopes of a momentous come-from-behind win as he birdied the opening hole, only to fritter away shots at the second and fourth before lifting his spirits with back-to-back birdies at six and seven.

McIlroy looked certain to earn another top-10 finish after he birdied the 10th, rattled home a 35-foot putt for eagle at the 13th and holed out from a greenside bunker for an unlikely birdie at the 16th, but he gave two strokes back when he found water at 17 and his dejection was obvious as he headed to sign for a 67 and a score of 14 under par.