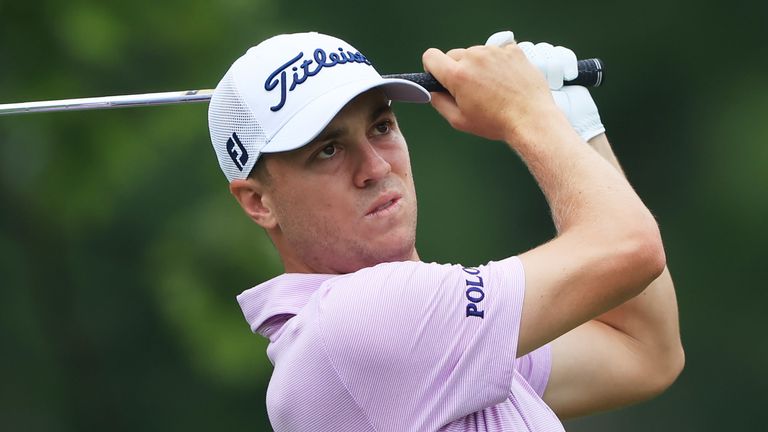 Collin Morikawa edged out Justin Thomas on the third play-off hole to clinch victory after a captivating final day of the inaugural Workday Charity Open.

Thomas had looked odds-on favourite to wrap up the win at Muirfield Village after he recovered from a ragged start with four straight birdies around the turn, and a thrilling eagle at the 15th lifted him three clear with three to play.

But he bogeyed 16 and could not match Morikawa's birdie at the 17th, and a wayward drive led to a fourth dropped shot of the round - and the tournament - for Thomas as he completed a 69 for a score of 19 under, with Morikawa forcing extra holes as he signed for a 66.

The leading pair headed back to the 18th for the play-off, and a Thomas' roar of "come on" echoed around the Ohio resort when he holed a remarkable 50-foot putt for birdie, only for Morikawa to follow him in from half that distance to extend the contest.

Thomas had a 12-footer for the win back on the 18th green moments later, but he underestimated the break on the putt and the players moved on to the 10th, where Morikawa split the fairway and Thomas' ball came to rest behind a small tree in the rough on the right, leaving him with no option but to pitch out to the short grass. 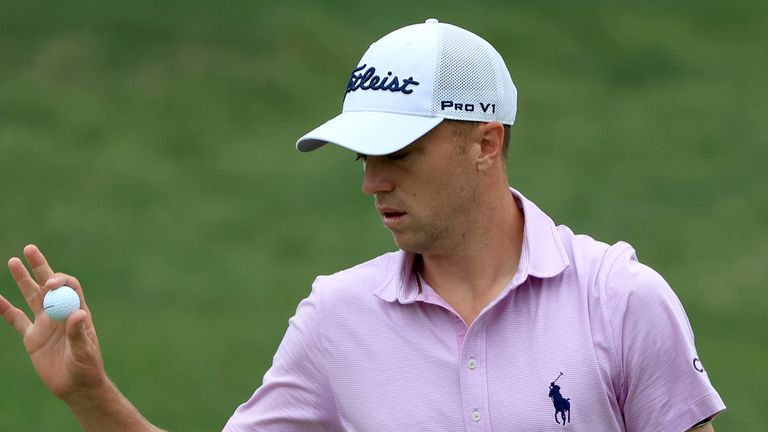 Morikawa held his nerve to hit a sweet second to 10 feet, and with Thomas unable to salvage his par, the 23-year-old enjoyed the luxury of two putts for the win - his second on the PGA Tour and his first since making his breakthrough at the Barracuda Championship almost a year ago.

Having cruised through the opening 54 holes bogey free, Thomas' clean run ended when he failed to find the putting surface from a greenside bunker, although he did come within a whisker of pitching in to save par, and he bunkered his approach to the next and endured a similar outcome.

Sky Sports Golf are offering Sky VIP customers the chance to be part of the virtual golf crowd when the European Tour returns later this month. Join Sky VIP and enter on the My Sky app by July 19.

With Thomas clearly out of sorts with his irons, Morikawa and Viktor Hovland sensed an opening and soon found themselves tied for the lead on 17 under when the American eagled the fifth from 13 feet, and the 22-year-old Norwegian could not follow him in from closer but a two-putt birdie was his third in a row.

Hovland erred when he found water at the next to leave Morikawa in sole possession of the lead, and both would par their way to the turn as Thomas suddenly turned his fortunes around with his morale-boosting birdies at the eighth and ninth.

Thomas holed from 10 feet for another birdie at 10, where Hovland came up short with his approach and bogeyed before matching the Thomas birdie at the long 11th, while Morikawa was the only one of the final trio to birdie the short 12th.

Hovland left himself with too much ground to make up when he found water at the 14th when attempting to drive the green, which Morikawa managed having just bogeyed the 13th but he would have to settle for a two-putt birdie as Thomas took the conservative route to a three.

Thomas then regained control at the par-five 15th, where Morikawa gouged his way from rough to more rough before doing well to make par, and Thomas walked to the next tee armed with a three-stroke advantage after he rolled in a perfect 25-footer for eagle.

But missing the green at 16 would cost Thomas his third blemish of the tournament, and Morikawa ramped up the pressure when he holed from inside 10 feet for birdie on the penultimate green to trim Thomas' lead to just a single shot heading up the last.

Thomas then blocked his tee-shot too far right and caught a tree, and he could not quite reach the green with his approach and could not get his pitch within 10 feet of the flag just as Morikawa was lining up a tricky, sharp-breaking 17-foot putt for birdie.

Morikawa's effort lacked conviction and Thomas' attempt to save par slid past the cup on the right, although Morikawa almost suffered the indignity of missing his two-footer for par as his ball took a close look at the lip before deciding to drop.

But his composure throughout the sudden-death play-off was not in question as he landed the biggest win of his career just a month after losing out in a play-off to Daniel Berger in the Charles Schwab Challenge at Colonial.