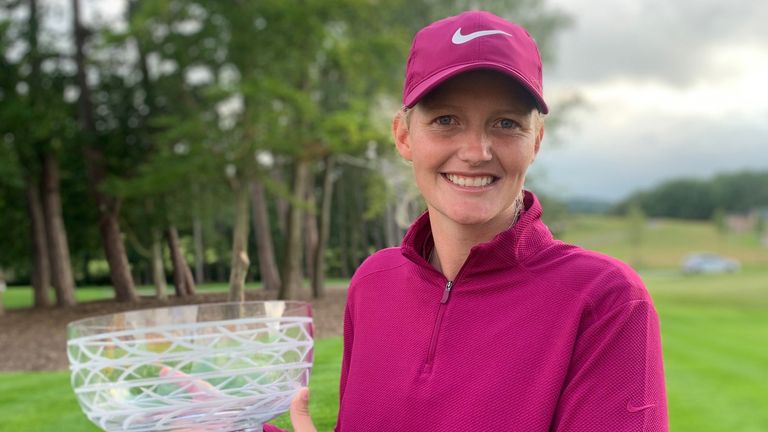 Gabriella Cowley snatched a tense win in week five of the Rose Ladies Series as the closing holes took a toll on the field at the JCB Golf and Country Club.

Cowley emerged victorious with a two-under 70 proving enough to hold off six players on one under including Solheim Cup stars Charley Hull and Georgia Hall, who had to settle for joint runners-up for the second week running.

Birdies at the third and sixth got Cowley off to a fine start which she improved with three consecutive birdies to begin the back nine, but she was one of the early victims of the daunting run-in.

Cowley double-bogeyed the 16th and dropped another shot at the last, while playing-partner Hall picked up three shots on the leader when she birdied 16, only to finish bogey, double-bogey to card a 71.

Hull, who missed a four-foot par putt which would have forced a play-off against two-time Series winner Gemma Dryburgh at Royal St George's last week, did manage to play the last three holes in level par, but she was left to rue a double-bogey seven at the 13th and a bogey at 15 as she also signed for a one-under round.

Heather MacRae also finished one behind after bogeys at 16 and 18, while Annabel Dimmock got to four under when she pitched in for an eagle-two at the 12th only to drop three shots over the treacherous final four holes.

The logjam on one under was rounded off by Welsh player Chloe Williams and Australian Whitney Hillier, who were both blemish-free down the stretch but were unable to match the earlier round of a relieved Cowley, who was crowned champion following an anxious wait of around four hours in the clubhouse.

"It's the best day of my career," said the 24-year-old Cowley, whose win moved her into a podium position in the American Golf Order of Merit, with Hull toppling Dryburgh from pole.

"It was a nervous wait in the clubhouse, and I was obviously disappointed with my finish but I never lost hope. I had my dad on the bag and it was a brilliant day from which I'll take a lot of confidence."​

Hull had earlier provided a huge boost for the tournament organisers when she declared she would remain in the UK to see out the remainder of the Series rather than head to the United States for the imminent resumption of the LPGA Tour.

Dryburgh has decided to travel to Ohio, where she will undergo two weeks of quarantine before teeing up in the LPGA Drive On Championship, but Hull and Hall are both unwilling to make the trip across the Atlantic.

"I've spoken to Justin and Kate [Rose's wife] and they are thrilled that Charley is to carry on playing in the series," tournament director, Paul McDonnell, told the Daily Telegraph.

"To have someone of Charley's status is, of course, a big boost. We completely understand why Gemma felt she needed to be back on the LPGA Tour to fight for her playing status and we wish her all the best. The series is going from strength to strength and is sure to get even more exciting in the forthcoming weeks."

The Series now moves on to Bearwood Lakes next week, with The Shire playing host on July 30 in the final event before the three-tournament Grand Final.