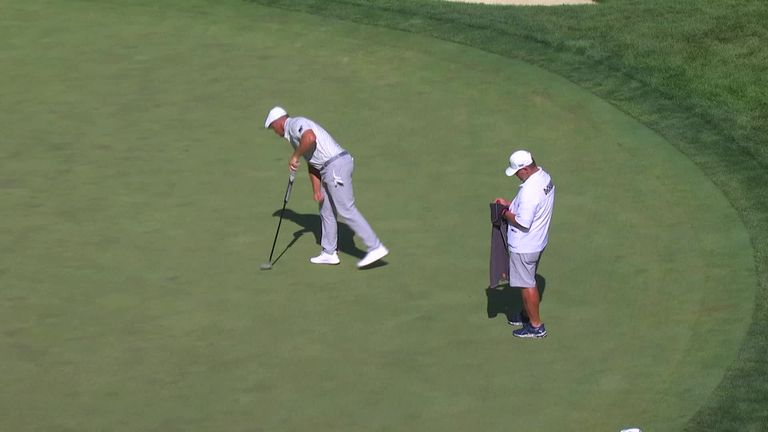 Bryson DeChambeau has proved he has the brawn, but he neglected to engage the brain as he ran up a quintuple-bogey TEN on day two of The Memorial Tournament.

DeChambeau was level par for his second round after an inconsistent first 14 holes in which he mixed five birdies with five bogeys, but some astonishing decision-making at the next effectively ensured he would not be at Muirfield Village over the weekend.

His torment at the par-five began with a pulled drive into water and, after taking a penalty drop in the thick rough among the trees, it appeared he would have little option but to pitch his ball back to the sanctity of the fairway.

But he was having none of that!

DeChambeau insisted his lie was good enough for him to bludgeon a fairway-wood up to the vicinity of the green with plenty of draw. And he made good contact, but without the draw - twice!

Both of his first two bold attempts to pull off the spectacular ended with his ball sailing out-of-bounds, and his third was heading for the same fate before clipping a tree and bounding down a cart path before coming to rest just short of more water.

He then argued with the official following his group, and then the tournament referee, that his fifth shot was not out-of-bounds as his ball was up against a fence post, but the ruling was upheld and DeChambeau stomped off to play his eighth.

The recent Rocket Mortgage Classic champion gouged a wedge to 25 feet and the putt to avoid a double-figure score pulled up three feet short, but he was past caring in the knowledge that his irrational play had taken him out of the tournament.

Watch the video above to see how DeChambeau ran up a bizarre 10 at the Memorial Tournament.