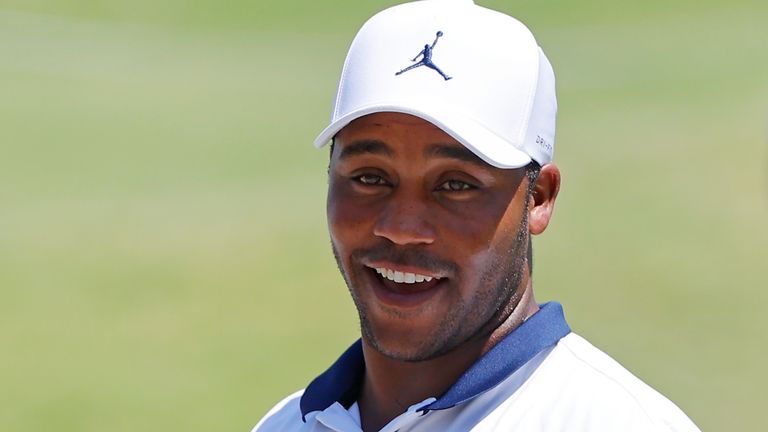 Harold Varner III and Tom Hoge both flirted with magical 59s as they claimed a share of the first round lead at the Wyndham Championship in North Carolina.

Varner carded eight birdies in his early eight-under 62 and held the lead outright until Hoge chipped in at the 16th to move to nine under, leaving him needing a birdie-birdie finish to break 60.

But Hoge missed from 10 feet at the 17th and then bogeyed the last to fall back into a tie at the top with Varner, while Roger Sloan made it a three-way share of the lead when birdied 16 and 17 and just missed out on three in a row at the last.

Varner picked up two early birdies and made four in a row around the turn as he peppered the pins with some precise approach play, and he added two more birdies at 13 and 15 but insisted he did not know he needed three further birdies to shoot 59.

"Dang, I wish I would have," said Varner when asked if a 59 was in his thoughts as he made his way to the 16th tee. "No, I didn't think about it at all, but I was just trying to birdie every hole. You can go get it out here obviously with the scores, so I just knew that, you know, the gas pedal's on the right!

"I've never done that before, I've never completed a round to be able to have a chance to shoot 59, especially playing with my friends. Yeah, that would be pretty cool, but 62 will do."

Varner was also delighted to get down in two for par from 65 feet at the last to keep a bogey off his card, adding: "The biggest thing was the two-putt on 18, just not giving it away when you've worked that hard. Momentum is everything."

Hoge had an even better chance to become the 11th player to card a 59 in a PGA Tour event, the ninth being Brandt Snedeker at the same venue two years ago.

The American carded five birdies in six holes in an outward 30 and picked up another at the 11th, although he parred the next three holes before getting back on track with a brilliant eagle at the 15th following a delightful 230-yard approach to 13 feet.

He looked in trouble when he failed to hold the green at the short 16th only to pull off an exquisite chip-in for a bonus birdie, and he gouged his second from the primary rough to 10 feet at the penultimate hole but mis-read the putt.

Hoge's playing partner Sloan got off to an even hotter start when he birdied six of the first eight holes before a pulled drive at the ninth cost him his only bogey of the round.

Sloan, needing a big week to qualify for the FexExCup PLay-Offs, responded with a birdie at 10 and broke a run of five pars with further birdies at 16 and 17, although he narrowly failed to get another putt to drop from 15 feet at the last.

Harris English led the chasing pack after he fired a 64, while former Masters champion Patrick Reed was one of a number of players to open with a 65 before play was suspended late in the day due to thunderstorms in the region.

But Brooks Koepka, playing in his six consecutive tournament despite admitting he was "nowhere near 100 per cent" fit as he continues to struggle with his ongoing knee problem, stumbled to a 72 to leave him staring at an unscheduled weekend off.