Dustin Johnson saw lead trimmed from four shots to one after five holes on final day, but he pulled away to win by five and set a new Masters scoring record at 20-under par to claim second major title 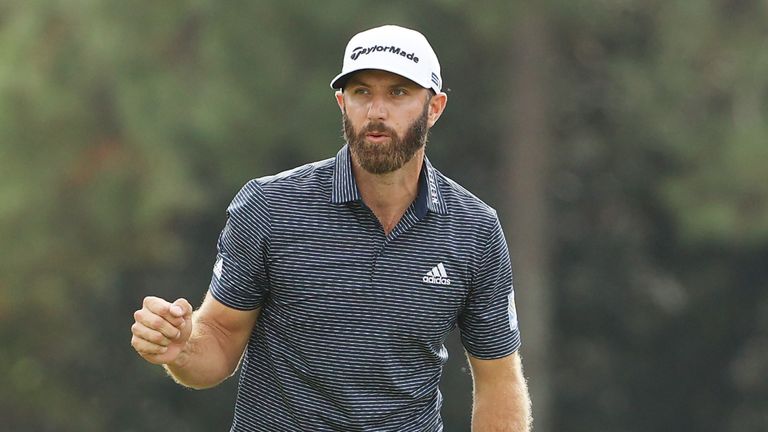 Dustin Johnson overcame an early stutter to march to a record-breaking victory at the 84th Masters with another high-quality performance on the final day at Augusta National.

Johnson's overnight four-shot lead was whittled down to one within five holes as Cameron Smith and Sungjae Im put early pressure on the American, but he refused to buckle and closed with a four-under 68 for a five-shot victory while setting a new tournament record of 20-under par, eclipsing the previous best held jointly by Tiger Woods and Jordan Spieth.

Three consecutive birdies from the 13th ensured a relatively stress-free march to the title for Johnson, which upgraded to procession status when he avoided water with his tee shot to 16 and safely two-putted to a rare back-right pin position from the lower level.

Rory McIlroy got to within five of the lead with three birdies over the first eight holes, but he managed only one more in a 69 that left him nine behind the champion, while Woods hit the headlines for the wrong reasons after making a 10 at the par-three 12th, including three in the water, although he did rally with five birdies over the last six holes.

Johnson looked a little unsettled on the first tee and drove into the fairway bunker on the right, but he clipped a useful second onto the heart of the green and skipped to the second tee with a par on his card.

Another pushed drive on the second found the first cut, from where he scuffed an ambitious fairway-wood and then got too cute with his pitch and dumped it in the front trap.

But he called on his scrambling qualities to save par just as Smith followed his birdie at the second with another at the third to halve Johnson's overnight lead to just two strokes.

Johnson hit back when he atoned for a bad pitch at the third to roll in a slippery, big-breaking putt for birdie at the third, while Im stayed three behind after matching Smith's earlier birdies at two and three.

The gap at the top was back to two when Johnson was a club short with his tee shot to the tough fourth, and he needed three putts to get down before another shot went following a bunkered drive at the fifth, where Im got up-and-down to save par and find himself just one behind the leader.

Johnson responded immediately and converted from six feet at the sixth, and his lead was back to three when Im bogeyed and made another error at the seventh, where Smith had produced a stunning second from the pines to set up birdie from inside 10 feet. 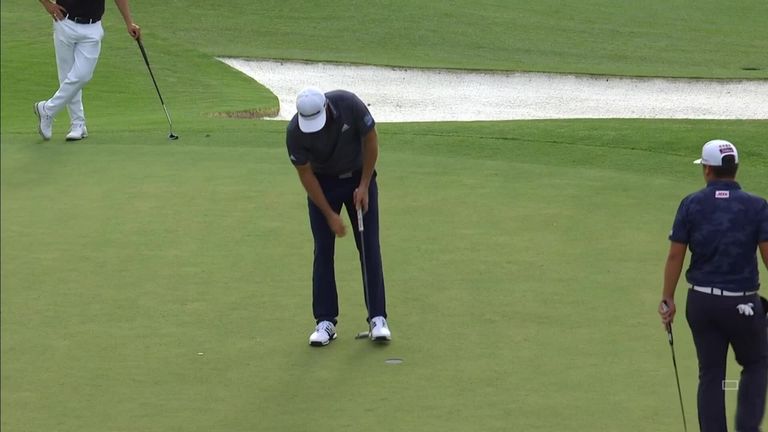 Smith conjured up something similar on the ninth, his ball pitching on the left fringe and rolling to four feet for his fourth birdie of the day, with Johnson finding the eighth green with two lusty blows and safely two-putting for a birdie-four.

A good par at the ninth took Johnson to the turn in 35 as he stayed two clear of Smith, who faltered at the 11th before the champion-elect followed a good run of pars with a birdie at 13 which restored his four-shot buffer.

Further birdies at 14 and 15 effectively put the outcome beyond doubt. The only question that remained was by how far he would break the overall scoring record before signing his card, heading to the Butler Cabin and being helped into a crisp Green Jacket by Woods.

A good two-putt for par from the lower level at the 16th, where the pin was in a rare back-right position, was his last main stumbling block negotiated, and cast-iron pars over the final two holes wrapped up a week of sustained excellence from the clear-cut world No 1.

His winning score was two shots better than Woods in 1997 and Spieth in 2015, while another Augusta record fell to Smith as his closing 69 made him the first player to fire sub-70 rounds on all four days of the Masters.

Smith's three-under closer was matched by Im as they shared second place, three shots ahead of world No 3 Justin Thomas (70), with McIlroy a further stroke off the pace along with Dylan Frittelli (72).

McIlroy wrote off his chances on Saturday evening as he contemplated being eight shots off the pace, although he did get to within five of the leader with his third birdie of the day at the eighth, but he managed only one more at the 13th and settled for a 69 and a tie for fifth on 11 under par.

World No 2 Jon Rahm, who shared the halfway lead with Johnson and Thomas before losing ground with a third-round 72, had only two pars on his card in an entertaining back-nine which featured an eagle at 15, three birdies, one bogey and a double-bogey five at the 12th after a visit to the water. 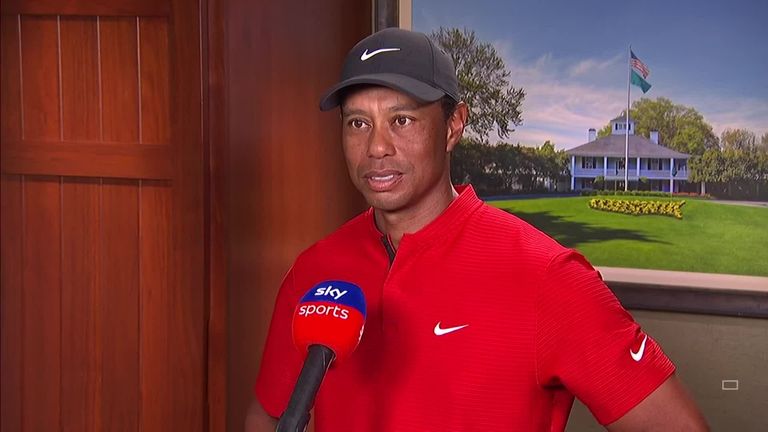 That all added up to a 71 and a 72-hole score of 10 under alongside Brooks Koepka (70) and CT Pan (68), while Woods was left to lick his wounds after humiliation at the 12th - the first double-figure score he has made on any hole in his professional career.