Emily Pedersen secured the Ladies European Tour Order of Merit with her second successive win in Saudi Arabia, with the Dane claiming victories in both the team and individual events in the Saudi Ladies Team International. 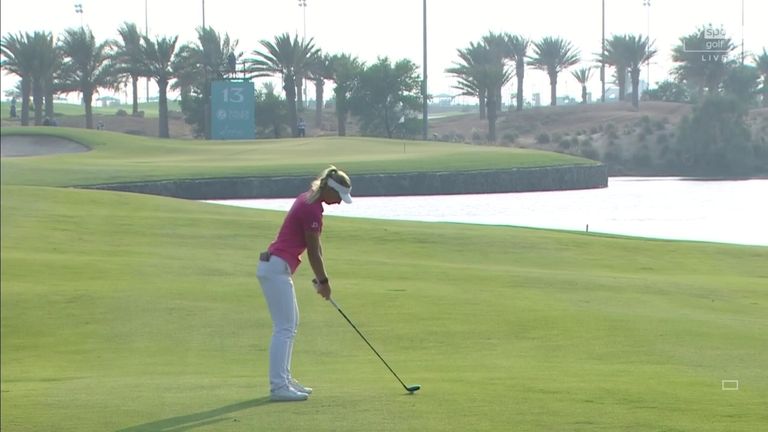 Emily Pedersen secured her second victory of the week and her third of the Ladies European Tour season with a two-shot win at the Saudi Ladies Team International.

Pedersen gave herself an unassailable lead in the season-long Race to Costa Del Sol standings by topping the leaderboard at Royal Greens Golf & Country Club, the same venue where she also won the Amarco Saudi Ladies International on Sunday.

The 24-year-old carded a bogey-free 67 on the final day to end the week on 14 under and secure the individual title, while Pedersen was also part of the trio that claimed a one-shot win in the team event.

Pedersen was grouped with Scotland's Michele Thomson and South Africa's Casandra Hall, following an NFL-style draft ahead of the tournament, with Hall making a decisive birdie on the par-five 18th to help them secure that narrow win.

"We did really well today, we complemented each other," Pedersen said. "Today was the first day where we didn't have a hole over par so I 'm really happy that we got that done and it was a really clutch putt by Casandra on the last.

"This has obviously been a strange year for all of us with Covid, everyone's saying it's such a bad year and I'm here having the best year ever, so it's a little weird but I'm just really happy."

Australia's Stephanie Kyriacou holed out twice on the final day on her way to a course-record 63 and a share of second alongside Anne van Dam and Luna Sobron Galmes, with Charley Hull a further three strokes back in fifth place.

English duo Georgia Hall and Elanor Givens ended the week six shots back in tied-sixth ahead of Ursula Wilkstrom and Johanna Gustavsson, while Dame Laura Davies eagled the par-five last to close a second successive 70 and claim a share of 15th.