Jon Rahm's hole-in-one ahead of The Masters, Collin Morikawa driving the green at the PGA Championship and Sophia Popov's driver off the deck at the AIG Women's Open all feature in the top golf shots of 2020. 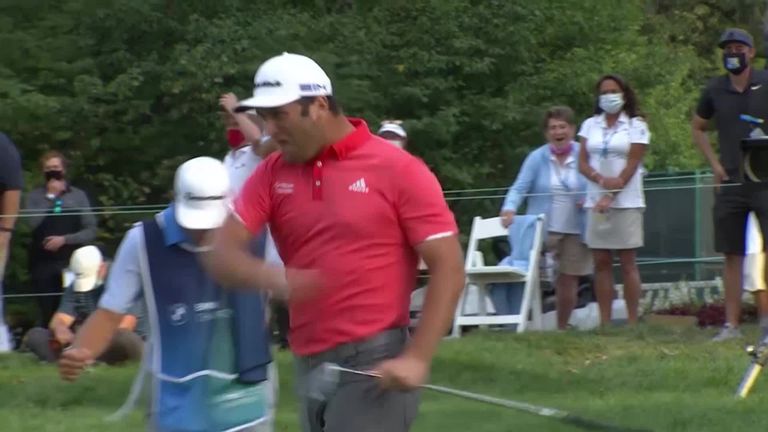 Impressive hole-outs, incredible power-hitting and a couple of the most unlikely aces you’ll ever see all feature in our shortlist of 2020's most memorable golf shots.

The golfing calendar has been severely disrupted over the past 12 months due to the coronavirus pandemic, although there was still plenty of time for thrilling finishes, major breakthroughs and some tournaments that will live long in the memory.

Collin Morikawa was one of two male golfers to claim a maiden major title in 2020, with the American driving the par-four 16th green at TPC Harding Park on the final day to help secure a two-shot victory at the PGA Championship.

A driver-off-the-deck eagle helped Sophia Popov to a shock victory at the AIG Women's Open, the first of four first-time major champions in the women's game this season, while Mirim Lee's unlikely chip-in forced a play-off on her way to winning the ANA Inspiration.

Jon Rahm won twice in five starts after golf's resumption in the summer, with a holed pitch shot the highlight of his success at the Memorial Tournament and a 66-foot birdie putt seeing him snatch victory at the BMW Championship.

The Spaniard also sent social media into a frenzy ahead of the Masters with his pond-skipping hole-in-one during a practice round at Augusta National, while another viral video from 2020 was when one-handed amateur Laurent Hurtbuise made an ace at the American Express event.

Ross McGowan's bunker hole-out at the Italian Open and Robert Streb going inches away from doing the same at the RSM Classic also make our top-10, as does Wilco Nienaber's remarkable 439-yard drive from the Joburg Open.

What was the standout golf shot from the past 12 months? Click on the video above to look back at some of the most impressive moments from the 2020 golfing archives!