"I don't feel like I played great this week, I felt like I was managing my game a bit. It was nice to get a competitive week under my belt and see where my game is and what I need to do to keep on improving"

Rory McIlroy once again came up short in Abu Dhabi and felt a lack of consistency throughout the week made Tyrrell Hatton's task that much easier.

McIlroy's first start of the year began in encouraging style as he opened with a 64 to take the first-round lead and, after an erratic second day, he reclaimed top spot with a high-quality back-nine in a third-round 67.

But he was unable to build on a good start to his final round, making birdies at two of the first three holes before a series of errors and the brilliance of Hatton combined to send the Englishman into a commanding lead down the stretch.

McIlroy relinquished the lead when he required five shots just to hit the green at the long eighth, and the 10th was a huge factor as Hatton holed a 35-foot putt for birdie while McIlroy was lining up a makeable chance for eagle. 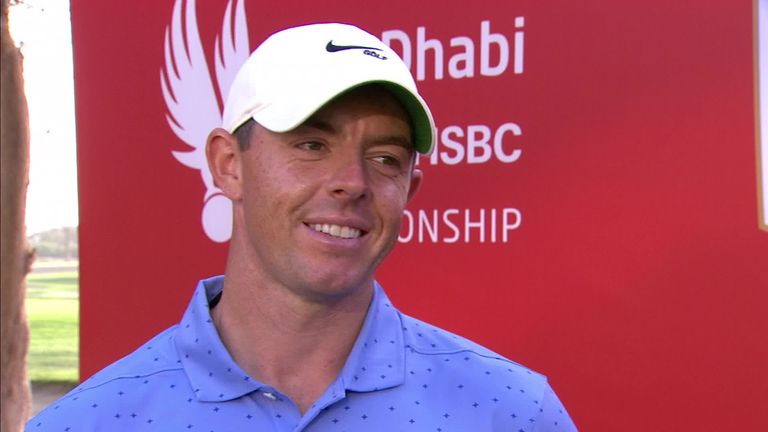 Another mistake at 11 left McIlroy with too much ground to make up as Hatton cruised to a four-shot win over a fast-finishing Jason Scrivener, with a birdie at 18 at least securing a podium finish for the Northern Irishman - his eighth top-three in 11 years in Abu Dhabi.

"I started great with two birdies in the first three, and then I felt like there were a few putts which the wind affected more than maybe the last couple days," said McIlroy, who now heads to California for the Farmers Insurance Open at Torrey Pines.

"A couple of bogeys around the turn didn't help, and I thought I was in good position on 10 and Tyrrell was outside of me, then he makes that putt for birdie and I can't make mine for eagle. That was a huge sort of momentum-keeper for him, then I bogeyed the next and after that, it was hard to get back into it."

McIlroy was happy with certain elements of his game and he was grateful to get some competitive golf in the locker for the first time since the Masters, but he knows he has much to work on and improve ahead of a busy year for golf.

"I don't feel like I played great this week, I felt like I was managing my game a bit," he added. "It was nice to get a competitive week under my belt and see where my game is and what I need to do to keep on improving.

"I thought for the most part of the week, my short game and my putting was good. I scrambled well, and I hit some pretty good approach shots, especially last night coming down the last few holes.

"So I need a little more consistency and being able to replicate the good ones hole after hole and then day after day until you put four rounds together."