Paul Casey holds a one-shot lead over Robert MacIntyre after a third-round 64 at the Omega Dubai Desert Classic; 2017 champion Sergio Garcia four back and Justin Rose in the group six behind heading into the final day 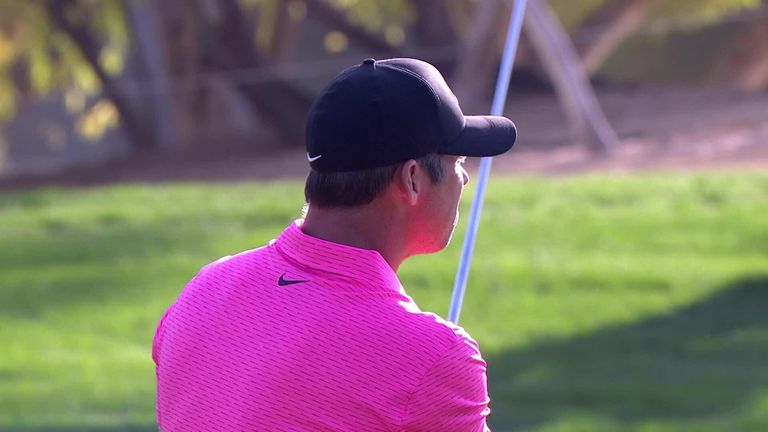 Paul Casey produced a sparkling finish to take a one-shot lead into the final round of the Omega Dubai Desert Classic.

The Englishman went birdie-eagle over his final two holes to close out a round-of-the-day 64 at Emirates Golf Club, taking him to 15 under and in pole position in his race to claim a 15th European Tour title.

Robert MacIntyre posted a five-under 67 to stay within one of the lead, despite dropping three shots in a two-hole stretch on his front nine, with Brandon Stone two off the pace in third spot after a third-round 66.

Casey made three birdies in a four-hole stretch from the second and added another from 15 feet at the seventh to turn in 31, with a tap-in at the par-five 10th taking him within one of the lead.

The Englishman ended a run of pars with a chip-in birdie from off the 17th green, before striking a brilliant three-iron to ten feet to set up a closing eagle, equal the lowest round of the week and jump to the top of the leaderboard.

Paul Casey eagles the last to close a third-round 64 and move top of the #ODDC leaderboard! pic.twitter.com/n4uOBHFbbx

MacIntyre followed a six-foot birdie at the second by chipping in for eagle from the back of the third green, only to miss a 10-footer to save par at the next and three-putt from 15 feet to double-bogey the par-four fifth.

The Scot responded by birdieing the sixth and holing a 50-footer at the par-three next to reach the turn in 33, with a two-putt gain at the par-five tenth and a close-range birdie at the 13th briefly moving him alongside Stone in top spot.

Stone had set the initial clubhouse target at 13 under after birdieing three of his first five holes on his way to a six-under 66, with the South African picking up a shot at the tenth and cancelling out a bogey at the 12th by making a 10-foot eagle at the 13th and adding a 15-foot gain at the 15th.

MacIntyre edged ahead of Stone with a penultimate-hole birdie but was unable to find another at the last, having to lay up after a poor tee shot and two-putting for a closing par.

Ryder Cup captain Padraig Harrington posted a second successive 69 to jump inside the top-10, with Shane Lowry, Tommy Fleetwood and Lee Westwood all in the group sitting on seven under and eight off the lead.

Who will win the Omega Dubai Desert Classic? Watch the final round on Sunday live from 8.30am on Sky Sports Golf.