Suzann Pettersen, who holed the winning putt at the 2019 Solheim Cup, has praised the progress made in women's golf in recent years; the Norwegian has also welcomed the tri-sanctioned ISPS Handa World Invitational to this year's golfing calendar 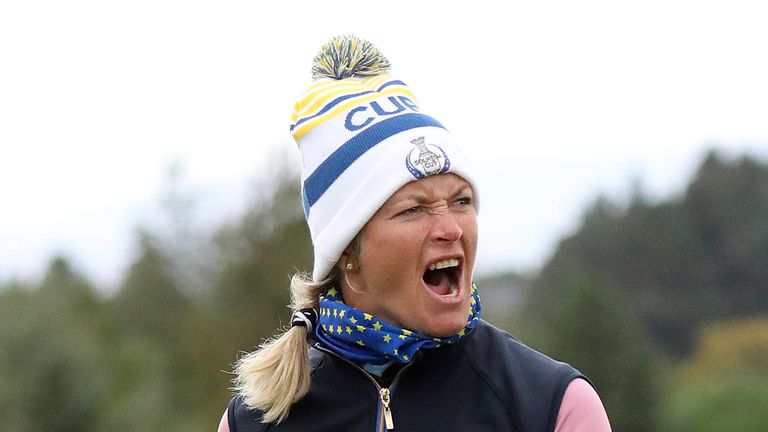 Suzann Pettersen has welcomed the addition of the ISPS Handa World Invitational to golf’s calendar, an event which will see men and women will compete for equal prize money

The 39-year-old Norwegian, who announced her retirement after holing the winning putt for Europe at the 2019 Solheim Cup, has praised the way the LPGA Tour has expanded under the 11-year stint of Mike Whan as commissioner.

The women's game has been transformed over the last decade with an increase in the total prize money and the addition of a host of new tournaments to the schedule.

2021 features 34 official events across the globe with two new events added to the tournament calendar and players competing for a record $76.45 million in official purses. ⛳️

"We've come a long way," 15-time LPGA Tour winner Pettersen told Sky Sports News. "If you look at the LPGA over the last 10 years there has been a lot of hard work put in. Every organisation needs great leadership - you can have a great product but if you don't have the right people running it you can literally lose it.

"On the LPGA we have been very fortunate having a great leadership in Mike Whan and his team and they have done this tremendous job creating playing opportunities, playing on the best courses, playing for more money, more exposure, more live TV.

"So the total picture of women's golf in general has grown tremendously. We want to keep growing because we have something that people want. We're accessible as well so it's fun. Now that I'm on the outside you see more of how it is perceived so I really enjoy it and women's golf has everything to gain.

"It's also fun now to see the Ladies European Tour working more closely with the LPGA rather than fighting each other. You are better off riding the same boat helping each other out, so it will be fun to see the fruits of that relationship as it grows over the next few years."

Pettersen also welcomed the addition of the ISPS Handa World Invitational to the golfing calendar this year, an event tri-sanctioned between the European Tour, LPGA Tour and Ladies European Tour. It will take place in Northern Ireland from July 28-August 1 with men and women competing together on the same two courses for equal prize money.

"It's about time," said Pettersen. "There is a difference between men's and women's sport, certain sports have fought harder for equal rights than others. It's a great step in the right direction, someone has to take the lead and try and showcase that this is something that we believe in and this is how we think it should be.

"That doesn't mean that everyone is behind that, but someone has to lead by a good example, and this is hopefully one of many to come.

"I think tennis has done a great job in this aspect where the women have fought for their own rights, saying 'we don't do any less work, why should we get paid less than the guys?'.

"These are the questions that society is faced with these days. You see more female CEOs, more females in top positions doing very great jobs and important jobs. So that's just a different aspect of this."

💭 “They deserve all the money & TV time. I believe that if we can get more women into golf then we can change the sport completely." 👏 👏
#RaiseOurGame pic.twitter.com/eSQUFNYzlA

Pettersen is looking forward to watching the event - which will feature 144 men and 144 women and was first introduced in 2019.

"There are plenty of regular 72-hole strokeplay events, but to get some excitement, to mix it up, to change the routines and for watching golf on TV, I think it's a great concept," she said.

"I think it's going to be fun, fun for the people to watch it, fun for the players, they can team up and be at the same venue. Golf is one of the world's biggest sports but it's a very small world and it would be nice to connect that tiny world a bit more and showcase how great it could be together."