The Players: Justin Thomas spurred on by support of Tiger Woods ahead of win at TPC Sawgrass

"Part of me wishes he was here so I could rub it in his face a little bit more!" Justin Thomas might have been joking, but he was also grateful for the support of Tiger Woods ahead of his victory at TPC Sawgrass 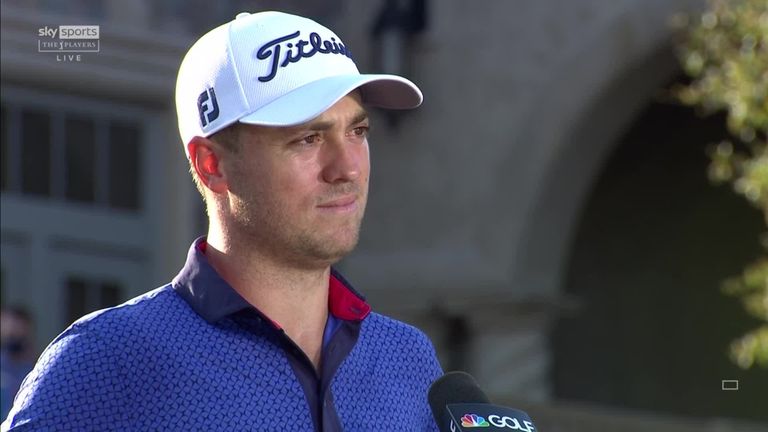 Justin Thomas expressed his gratitude to Tiger Woods for his support that inspired him to victory at The Players Championship, describing his final-round 68 as "one of the best rounds of my life tee to green".

With overnight leader Lee Westwood and last week's Bay Hill champion Bryson DeChambeau scrambling hard to stay in contention after both made erratic starts, Thomas seized his chance and powered into the lead with a sensational run of scoring around the turn.

He birdied nine and 10 and then converted a 20-foot putt for eagle at the 11th before another birdie at the 12th took him two clear at the time, although he then opened the door for Westwood when he missed a tiny putt for par on the 14th green.

But he recovered with a composed four at 16 and held onto his lead over the daunting two finishing holes, although he did come perilously close to pulling his final tee shot into the lake just as Westwood, who birdied 14 to pull within one, three-putted the 17th green to make Thomas' task much easier.

A par closed out a 68 for an emotional Thomas who, like DeChambeau after his Arnold Palmer Invitational win, took the time to thank Woods for his support as he continues to recover from serious leg injuries sustained in his horrendous car accident last month.

"I was replaying what Tiger told me a lot in my head," said Thomas. "He likes to give me a lot of grief, especially when he's not here, and, like Bryson said, we're all pulling for him, and I'm so glad to hear everything has been going well with him. 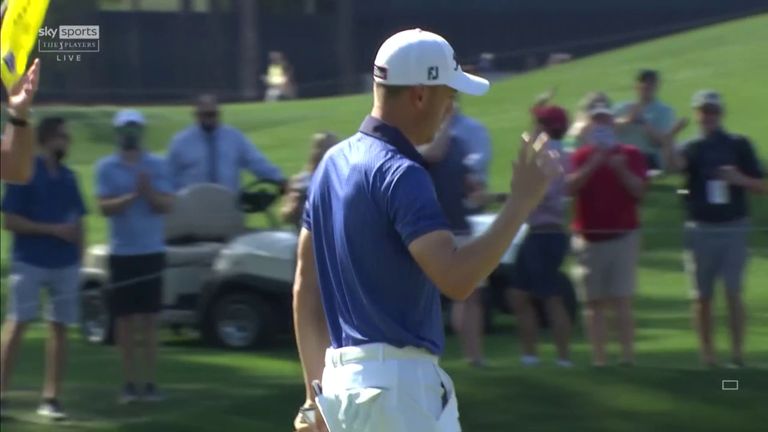 "Part of me wishes he was here so I could rub it in his face a little bit more! But no, I'm happy and I hope he's happy, and I always appreciate his help. He told me just to stay patient. There's been a lot of other stuff, but it's between us, and it's great.

"He's so nice to myself and Bryson and so many guys out here that if you would have told us when we were 15, 20 years old that Tiger Woods was texting us the night before we have a chance to win the tournament trying to inspire us, that's pretty cool."

Thomas also admitted he felt extra pressure with the return of fans to the PGA Tour, even with just 20 per cent of the usual attendance, but he welcomed the return of the spectators.

"I'll tell you what, it's a lot harder than when there weren't fans here, that's for sure," he added. "I'm so happy they're back and I'm so happy to be The Players champion. I fought so hard today, I stayed really patient, and that was probably one of the best rounds of my life tee to green.

"I had total control of the ball, and really was hitting a lot of good putts, just wasn't holing anything and I stayed patient and stayed patient. I've seen some pretty crazy stuff on TV happen in the past on this back nine, so I was glad to be on the better side of it this year."

Thomas had time to gather his thoughts before heading to his champion's press conference, where he gave an insight into the mental impact of his turbulent couple of months, dealing with the fallout from his use of a homophobic slur in Hawaii before being hit hard by the death of his grandfather, news of which reached him as he played the Phoenix Open.

"It's been a crappy couple months," he said. "I've had stuff happen in my life I never thought I'd have happen, and I mean, losing grandpa was terrible, and having to play a round of golf dealing with that, and then on top of that not playing well, it just was a lot, and it took a lot on me mentally.

"At the same time, that's just the way that it was. I had to figure it out and had to get over it, and if I wanted to come to these tournaments and have a chance to win, then I needed to suck it up and get over it. If I wanted to throw a pity party for myself or feel sorry for myself, there's no reason to show up, and I can stay home until I feel like I'm ready.

"This week was huge to win a big championship like this in front of fans again, which is incredible. You know, it tested me mentally, physically, emotionally, and I'm very proud of myself for getting it done."