"True golf fans were happy to be back watching the sport's top players at one of the best tournament venues in the world. I honestly felt that was a huge turning point in these difficult times and the road ahead was suddenly a little clearer"

The evergreen Lee Westwood produced a performance of technical excellence, nerve and experience, but The Players delivered a worthy champion in Justin Thomas. Ewen Murray looks back on a significant week at Sawgrass...

The dust has now settled on an outstanding Players Championship at Sawgrass and, with the inclusion of 10 to 20% of the normal spectator attendance, tournament atmosphere returned and the future is starting to look a little brighter. Add to that, in less than two weeks, all golfers will be back on their fairways across the British Isles and the clock change means we can play into the warm spring and summer evenings.

I ashamedly had a negative attitude as a player, always looking at the downs rather than the ups. When I finished my first career early at 35 years of age, I made a promise to myself to lean towards the positives and, despite perhaps the worst year in our lifetime, there are shafts of sunlight appearing as we head out of this pandemic.

I think we will all enjoy golf and appreciate the game more than we did previously. For the first time in long enough, the courses have had a rest and, although the green staff have only been able to do essential maintenance during the lockdowns, many courses will never have looked better.

In the weeks ahead, the monthly medal will be back in business along with the summer knockout, and clubhouses will once again enjoy members and visitors meeting for a drink and socialising before and after their round. Let's hope this progression continues and, with no setbacks, we return to normality and to a healthy future.

Sawgrass always delivers and there were many wonderful moments across the four days. One of the highlights for many would have been the emotive and joyous scenes late on Saturday afternoon at the famed 17th hole with Lee Westwood alongside his fiancee and caddie, Helen Storey.

Having walked around the edge of the lake to a fabulous ovation from those who were fortunate to be there, then up the path to the peninsula green, Lee stood over his 20-foot putt for a birdie. Down the slope, left to right and in for a two. Turning to Helen, double knuckles and an explosion of fingers. Smiles from everyone, loud roars from American fans genuinely pleased for an Englishman who, at that moment, was treated as one of their own.

True golf fans were happy to be back watching the sport's top players at one of the best tournament venues in the world. I don't often get emotional, but I honestly felt that was a huge turning point in these difficult times and the road ahead was suddenly a little clearer.

Many of you would have tuned in on Sunday evening hoping for a home victory, just as you did the previous week at Bay Hill. It was not to be, but at the age of 47, Lee is back inside the world's top twenty, proving golf is a game for the ages. His golf over the last fortnight has been a combination of technical excellence, nerve and experience. There will be many who hope he goes one better at Augusta National next month.

In Justin Thomas, the PGA Tour has a worthy champion. The last two months have not been easy. His poor choice of words in Hawaii coupled with the devastating loss of his grandfather would have disappointed and saddened him. A close golfing unit, his grandfather and his dad, Mike, have mentored Justin from a young age and it was heart-warming to see his family share his latest triumph by the final green.

His golf over the weekend, 64 and 68 was sublime. Some thought he rode his luck at the 72nd hole and some may be right. The right-to-left turn came early in the flight of his tee shot and finished dangerously close to the water. Was he aiming to finish there? Of course not, but that tee shot is one the hardest in the game and the job is to get it done.

It's why I picked Rory McIlroy's drive in winning the event two years ago as the shot of the year. Justin had the ball back in his stance and was playing for a slinging hook with his three-wood. One should not forget, it travelled 312 yards so it was well struck. I think he got away with the drive at the 16th, near the toe, short carry and 65 yards of run. 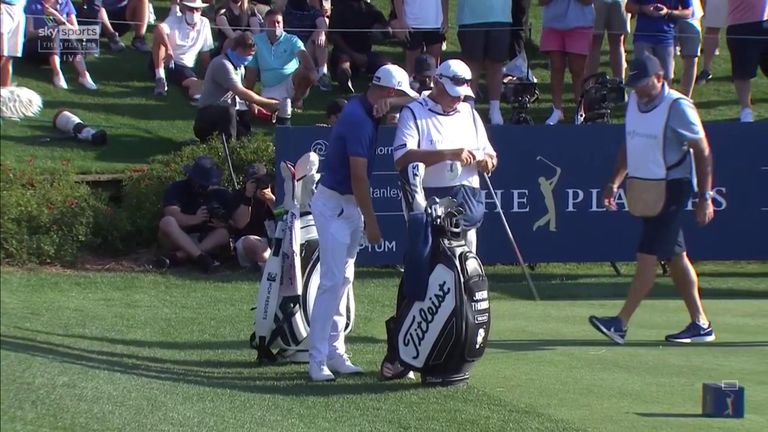 My first-class co-commentator, Paul McGinley and I will agree to disagree on that one, but Paul was 100% correct in stating that Thomas had the courage to shape these shots as required under the most extreme pressure. When you're playing against the best players in the game, on one of the most demanding courses, for one of the most prestigious titles, even the best need a small amount of fortune. Thomas richly deserved his.

Another fine performance came from the ever-improving Victor Perez. Having to return to the course to make the cut on the mark on Saturday morning, an impressive final two rounds hoisted him through the field into ninth to earn world Ryder Cup points. The Frenchman is in good shape to make Padraig Harrington's dozen at Whistling Straits in September.

The Honda Classic is next up and the following week sees the return of the WGC Match Play, with the PGA Tour staying in Texas before attention turns to the year's first major, The Masters. The fields won't be as strong as we've had recently as many of the players have different preferences ahead of a major. Some like to play, others rest. Some will play one of three, others two, very few will play all three.

As the minutes tick away for those who have been unable to play because of the restrictions, I wish you well when you return to the first tee. It's been a long time since you opened your shoulders so a word of advice. Insert a provisional ball into your pocket... just in case. Good golfing!