The Masters: Rory McIlroy hits his own father with a wayward shot at the seventh

Torrid start for Rory McIlroy on the first day at Augusta National, highlighted when he blocked his second to the seventh and hit his own father on the leg! 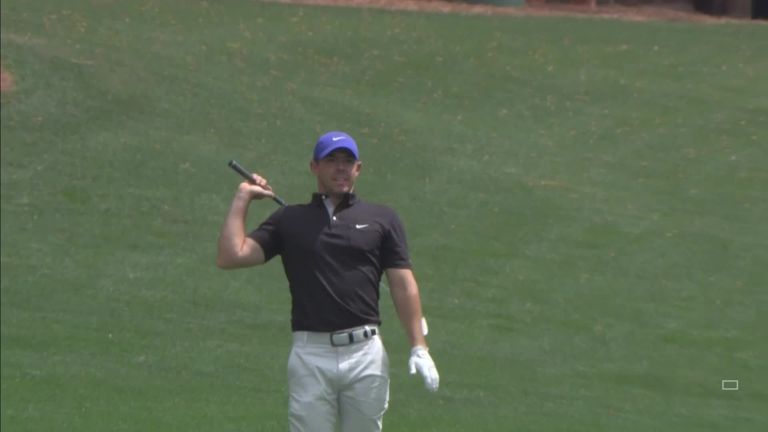 Rory McIlroy's tough start to the 85th Masters was also painful for his dad, who was hit in the leg by a stray shot from his son on the seventh hole.

After starting with four pars, McIlroy dropped shots at the fifth and sixth and then pulled his drive left of the fairway at the tough seventh, but his bold attempt to reach the green in two resulted only in a bruise for father Gerry.

Aiming to hit a sweeping draw around the pines, McIlroy blocked his mid-iron and clearly yelled "fore" as his ball veered towards the patrons on the right, although it appeared the warning shouts were not enough to alert his father.

Gerry McIlroy was walking towards the green when his son's ball hit him on the side of the leg, but at least he didn't divert it into deep trouble!

"I should ask for an autographed glove," joked Gerry to reporters. McIlroy Jnr, however, was far from all smiles as he was unable to get up-and-down and carded a third straight bogey and, although he clawed one back at the long eighth, he dropped another shot at the ninth to turn in 39 - three over par.

Worse was to follow on the back-nine, pulling his second into the pond to the left of the 11th green, and he then lost another ball in the water at the long 13th running up a deflating six to slide to five over par for the tournament.

McIlroy did, however, manage to get one back at the 15th and par his way in for a 76, and his spirits were restored when he faced the media for the inevitable line of questioning on the incident at the seventh and revealed he had aimed at his father with the intention of drawing his ball towards the green.

"In fairness, I was trying to turn it off him," he said. "It was a perfect shot, it was dead straight. But I think he was okay. He didn't limp away, he walked away pretty swiftly, so that was alright."

And when asked if he had offered a signed glove, McIlroy had a more practical alternative in mind.

"He's seen me sign plenty of stuff over the years, so I think that's the least of his worries. I think he just needs to go and put some ice on it, so maybe I'll autograph a bag of frozen peas for him!"

McIlroy was "encouraged" by his improvement over the latter stages of his round and remained optimistic about his chances of hauling himself back into contention with a good round on Friday. 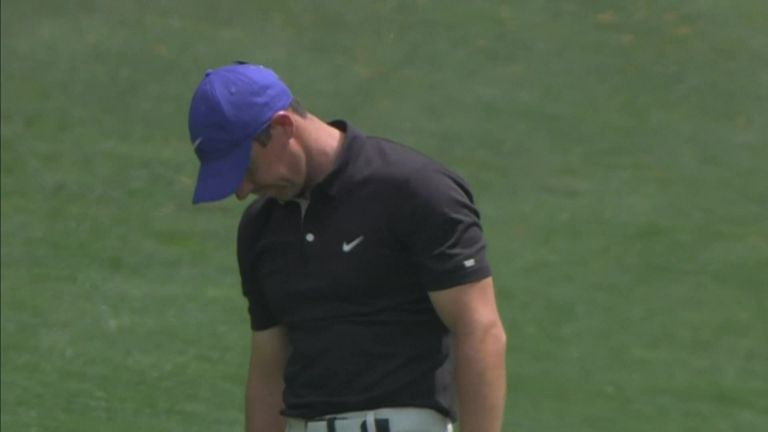 "My goal is just to play well and at least give myself a chance," he added. "Honestly I'm quite encouraged with how I hit it on the way in. I hit some loose shots out there, but after hitting the six-iron in the water on 13, I hit some really good shots coming in, so I'm encouraged by that.

"Going to go to the range here and work on it a little bit more, but it was just one of those days where I wasn't very efficient with my scoring. I opened with four pars and then you're going through that stretch where you're fighting against momentum, but if you make a birdie then you can get going, and just one of those days.

"But I hung in there, hit some good shots coming in. Could have made a couple more birdies, but it's not as if anyone is going really low out there. I'll do a little bit of practice and hopefully feel a little more comfortable tomorrow, go out there and shoot a good one."

Watch the video above to see McIlroy's stray shot at the seventh hit his own father on the leg!