Austrian Open: Martin Kaymer just a shot off the lead in freezing conditions on day one

Two-time major champion Martin Kaymer shines in the cold at the Austrian Golf Open, opening with a six-birdie 68 to sit just a shot behind first-round leader Alejandro Canizares; watch the second round live on Sky Sports Golf from 12.30pm on Friday 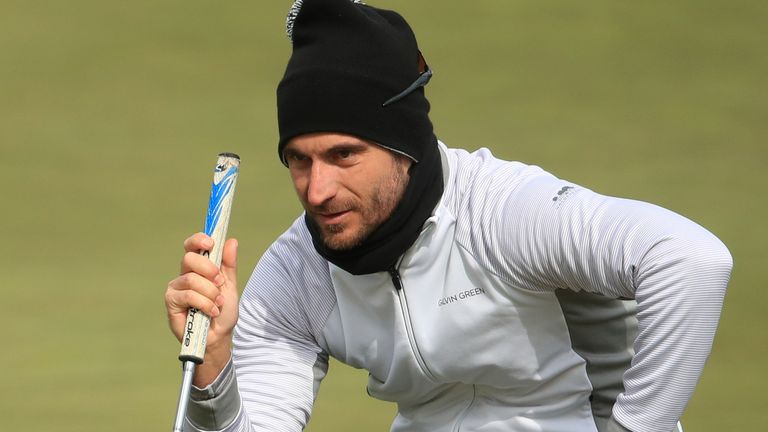 The best of the action from a freezing Diamond Country Club as Martin Kaymer and Alejandro Canizares both made strong starts to the Austrian Golf Open.

Martin Kaymer prospered in freezing conditions as he ended the first day of the Austrian Golf Open just one shot off the lead.

Kaymer, still without a win since landing his second major title at the US Open almost seven years ago, fired a four-under 68 as Alejandro Canizares set the first-round pace at the Diamond Country Club in Atzenbrugg.

It was tough going for the field with temperatures around the seven-degree mark but feeling closer to freezing due to a bitterly-cold wind, hardly the conditions you would expect a Spanish golfer to flourish in.

But Canizares warmed his spirits with an early eagle at the fourth and back-to-back birdies at seven and eight taking him to the turn in 32, and, after his only blemish of the day at the 12th, he birdied two of the next four holes to hit the front on five under par.

"I'm very pleased. It was tough to keep focus because it's so cold," said Canizares. "It was tough to feel the hands and that's very important. I think the strength was just keeping my head on every shot because it's very easy when you miss a shot to let it go on days like this when you're struggling physically and mentally to keep warm.

"It was just do my process and do every shot and I was happy the way I managed bad shots because I didn't let them get to me like has happened in the past. That was the key.

"I didn't think that I played wonderfully tee to green, it wasn't beautiful, but I hit some really good shots and I made some good putts in the end, so a solid round overall."

Canizares, whose last European Tour win was just over seven years ago, edged ahead of John Catlin, Rikard Karlberg, Jacques Kruyswijk and a delighted Kaymer, who got to five under with three birdies in four holes from the first before dropping his second shot of the round at the sixth.

"The biggest battle was probably the cold," said the German. "But in general the golf course plays pretty well, the conditions are nice, the greens are good, especially when I played in the morning. I had a very nice group, we were flowing, we all played fairly decent. I didn't make many mistakes, so four under was a decent start.

"It's still cold and windy, but in the tournament you do hit it a little bit better, a little bit further. The adrenalin is up, your focus is up, so I was quite pleased the way I played the golf course under those conditions today."

Richard Mansell made an encouraging start and carded an eagle and three birdies in his 69, a score later matched by fellow Englishman Daniel Gavins, who made three birdies and was one of only two players, along with Catlin, to go bogey-free on the round.

The Scottish trio of David Drysdale, Ewen Ferguson and Grant Forrest are a further shot adrift along with Belgian Thomas Detry, who enjoyed a hole-in-one at the short sixth in his two-under 70.