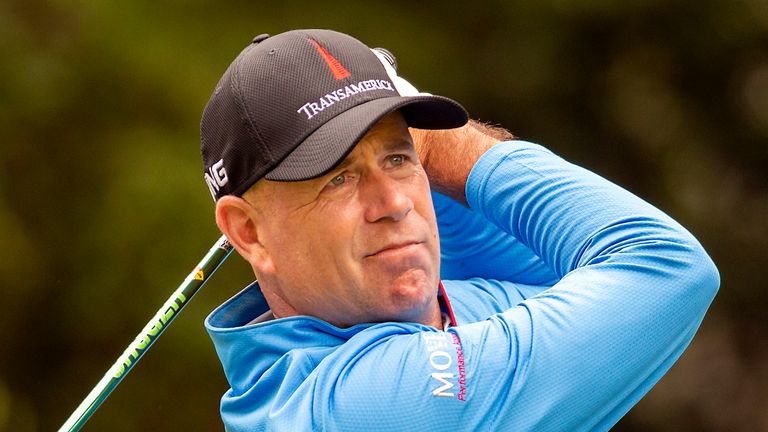 Veteran Stewart Cink fired back-to-back rounds of 63 to open up a five-shot lead in his 22nd start at the RBC Heritage.

Stewart Cink opened up a five-shot lead at the halfway stage of the RBC Heritage after firing back-to-back rounds of 63.

Cink followed an early eagle at the second with six birdies as he raced to 16 under par, dropping only one shot over the first 36 holes to become the oldest player to hold the halfway lead in the history of the tournament in South Carolina.

Overnight leader Cameron Smith slipped seven shots off the pace, while Dustin Johnson safely made it through to the weekend a week after his defence of the Masters title ended with a disappointing missed cut.

Cink was in a class of his own in his 22nd start in the event, and the champion of 2000 and 2004 got off to a great start when he drilled his second to the par-four second to within 10 feet and rolled in the putt for eagle.

The resurgent 47-year-old, whose win at the Safeway Open last September was his first since he denied Tom Watson at The Open in 2009, birdied the next from over 20 feet and picked up another shot at the sixth before cruising home in 31 to take a handsome lead into the weekend.

"It doesn't feel like anything all that special to be honest," said Cink, who has his son, Reagan, as his caddie. "We just worked our game plan. We haven't had too much wind, and this course without a lot of wind, there's just not that many surprises when you have a lot of experience around here.

"And I think we've kind of got what we expected out of most of our shots, and we've put it in the right place a lot, and really the key is we haven't put it in the wrong place very often.

"This is like hallmark Stewart Cink type of golf, and it's not always been go at every flag. What Reagan has really allowed me to do is to really quantify that game plan with a system that we use on every shot.

"We work it all up the night before and we come out here, and every shot we work that system through, and he agrees with what I say from a young age because he's learned how to play golf by watching me and playing golf with me.

"As a caddie he buys into the system, and when we have choices to make he's really good about reminding me what the prudent one is. It doesn't mean we play conservative; we're aggressive, but we're aggressive to the right places, and then when we need to be conservative, the system makes the decision for us.

"I'm 47; I don't have this unlimited boundless energy to constantly make these decisions all day long, so we've got a good system that makes the decisions for us." Billy Horschel was likely to run up a big number at the par-three 17th at the RBC Heritage after pulling his tee shot into water, but he holed his third from the drop zone, with a little help from the flag stick!

Cink's closest challenger is Corey Conners, who recovered from a double-bogey at the 14th - his fifth - with a barrage of birdies, including six on the front nine in a 64 which lifted the Canadian to 11 under par ahead of Emiliano Grillo, who was also seven under on the day.

Smith was unable to hit the heights of his opening 62 and needed to birdie his final hole on day two to return to nine under along with reigning PGA champion Collin Morikawa (68), Sungjae Im and Billy Horschel.

WGC Match Play champion Horschel provided the highlight of the day at the 17th, where he tugged his tee shot to the par-three into the water before producing a spectacular par save, his third from the drop zone hitting the pin and dropping straight into the hole.

Open champion Shane Lowry fired a 65 to get to seven under with England's Matt Fitzpatrick, who birdied five of his last seven holes to card a 64, with Masters runner-up Will Zalatoris also nine off the pace.

Johnson needed to go low to get into contention and got off to a fine start when he eagled the second only to bogey the fourth and fifth to leave him flirting with the cut line as he entered the back nine on one under for the tournament.

But the world No 1 made it safely through to the weekend thanks to an inward 31 which added up to a 67 and got him to five under along with rising Scottish star Bob MacIntyre and England's Matt Wallace.