Player Impact Program: What is the PGA Tour's bonus pool and which golfers will benefit from it?

What is the PGA Tour's new Player Impact Program? How will the system decide which golfers benefit the most financially from it? A look at the bonus pool being introduced at the top of the men's game 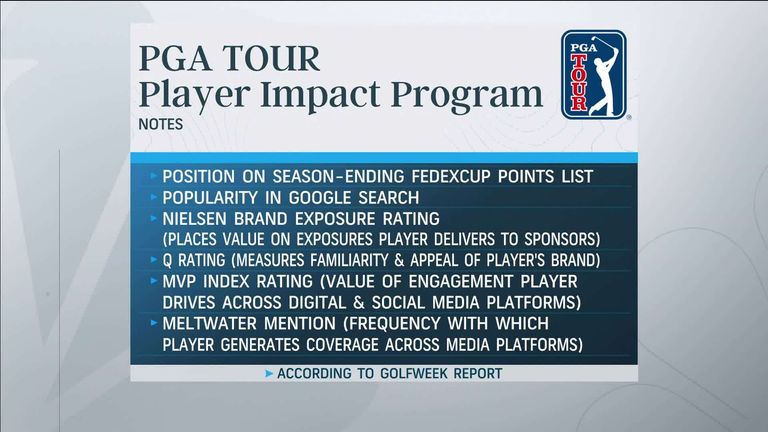 The PGA Tour has launched an additional financial bonus pool for the biggest names in golf, with players judged by their influence off the course rather than tournament results.

As reported by Golfweek, the Tour's new Player Impact Program will identify the 10 biggest needle-movers in the sport and compensate them through a $40m fund, with the system designed to compensate players that produce the most engagement from fans and sponsors.

The fund will be distributed among 10 players at the end of the year, with the most valuable getting $8m, while the list is not set to be published in the same way that the FedExCup and World Rankings are made public.

Those 10 players will be determined based on their impact score within the sport, with that number coming from combining several metrics that can be used to quantify a golfer's added value to the game.

One system used will be the MVP Index, a company founded by the father of three-time major champion Jordan Spieth, which measure the value of engagement on social and digital channels.

The report indicates that the Nielsen Brand Exposure rating - which places a value on the length of time players feature in TV broadcasts and the possible exposure for sponsors - will be used, along with a golfer's popularity when searched on Google.

The frequency a golfer generates coverage across a range of media platforms will be taken into account as well as their Q Rating, which measures the familiarity and appeal of a player's brand.

The leading scorer from 2019 - which Golf Channel report was included in a document circulated to players - was Tiger Woods, followed by Rory McIlroy, Brooks Koepka, Phil Mickelson and Rickie Fowler, with Jordan Spieth, Dustin Johnson, Justin Thomas, Justin Rose and Adam Scott rounding out the top 10.

The program appears to be a direct reaction to the Premier Golf League, believed to be heavily financed by Saudi Investors, which tried to lure some of golf's biggest names into a big-money breakaway competition earlier last year.

Rory McIlroy and Brooks Koepka were among the first players to say they were not interested in the league, with McIlroy telling reporters in January 2020 that the PGL proposals could be a "catalyst for some changes on this [PGA] Tour that can help it grow and move forward".