A Canary Islands double is on the cards for in-form South African Garrick Higgo, who birdied the last four holes to go two shots clear of the field in Tenerife. Watch Sunday's final round live from 11am on Sky Sports Golf. 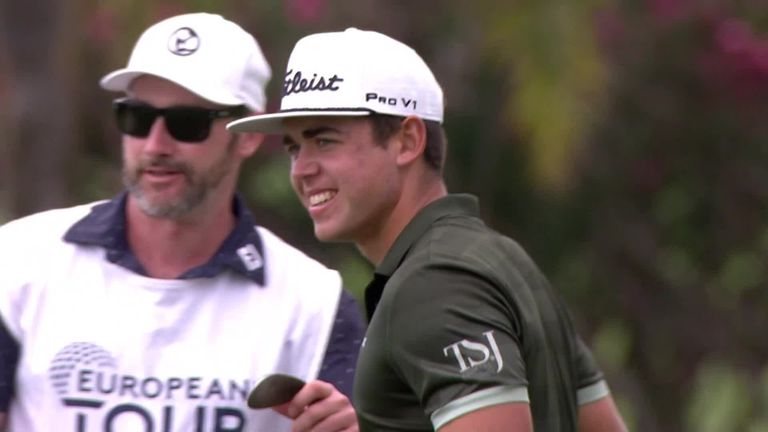 Garrick Higgo made two eagles and birdied the last four holes to go two shots clear at the Canary Islands Championship. Here are the highlights from his third round.

Garrick Higgo is on course for a second win in three weeks after he opened up a two-shot lead after the third round of the Canary Islands Championship.

Higgo birdied the last four holes at Golf Costa Adeje in Tenerife to return a seven-under 64 which lifted him to 20 under par, two ahead of Richard Mansell with Calum Hill a shot further back.

Andrew 'Beef' Johnston is five off the pace going into the final round, while overnight leader Adri Arnaus slipped seven shots behind after he got into huge trouble at the third, running up a quadruple-bogey nine.

Higgo will be the man to beat on Sunday as he looks for his third European Tour victory just a fortnight after a pair of 63s over the weekend earned him a three-shot win at the Gran Canaria Lopesan Open.

The South African had a mixed start to his third round, offsetting a birdie at the first with a mistake at the second before chipping in for eagle at the next and, after a run of seven pars, Higgo had another eagle on his card as he drilled his second to 12 feet at the 11th and converted the chance to jump to 17 under.

He gave one shot back at 12, but his approach play over the closing holes was sublime, setting up four birdie chances which he took with the minimum of fuss to end the day with the outright lead.

"I haven't been playing well up until Austria, really," said Higgo, who is just 21 years of age and turned professional barely two years ago. "But I've been working hard so when it's going your way you just need to enjoy it.

Meanwhile on @SkySportsGolf me and Nigel battle it out to the last #golf #f1 pic.twitter.com/2XWZWrQPd8

Mansell fired a seven-birdie 64 and was bogey-free for the day as he earned a place in Sunday's final group, while Hill also kept a bogey off his card and made six birdies in a 66.

The presence of Mansell and Hill in close proximity was not lost on former F1 world champion Damon Hill, a keen golfer who took to Twitter to reference his battles on a racetrack with Nigel Mansell, another former F1 driver who enjoys his golf.

Australian Maverick Antcliff fired a second successive bogey-free 64 to get to 15 under alongside Johnston, who was just one stroke off the lead when he made four birdies in five holes on the back nine, although his bogey at 17 and Higgo's big finish left the popular Englishman five behind.

Johnston and Antcliff were joined in a share of fourth place by a charging Tapio Pulkanen, who was the latest player to be put on "59 watch" after five straight birdies early in his round.

The Finn would have to settle for "only" a 61 - 10 under for the day and a rise of 56 places up the leaderboard, while Arnaus did well to recover from his early blow-out and managed to salvage a 72.

The final round is now live on air earlier than scheduled, coverage starts at 11am on Sky Sports Golf.