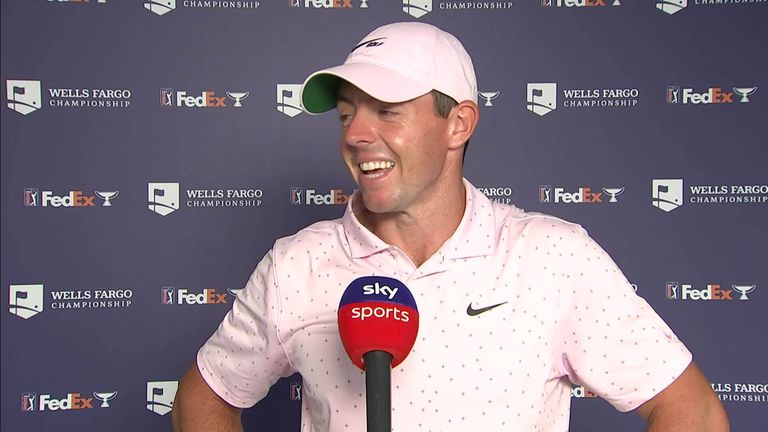 Rory McIlroy gave credit to his coaching team as well as caddie Harry Diamond as he reflected on his third victory at the Wells Fargo Championship.

McIlroy arrived at Quail Hollow with limited expectations having missed the cut in his previous two stroke play starts at The Players Championship and the Masters, while he also failed to progress from the group stages at the WGC-Dell Technologies Match Play.

The 32-year-old was clearly out of sorts at TPC Sawgrass and missed the halfway cut by 10 shots before revealing he was battling swing problems caused by "speed training", admitting his quest for extra speed and distance had been influenced by the manner of Bryson DeChambeau's victory at the US Open in September.

McIlroy then announced he had linked up with renowned swing coach Pete Cowen, while retaining the services of long-time advisor Michael Bannon, and his hard work on the practice range has been rewarded sooner than expected following his one-shot win at Quail Hollow - his first victory in 18 months.

"There's relief that I've won again, relief that my season is sort of back on track, and more just satisfaction at the journey that I'm on and the process that I've been going through to try to get back to this point," said McIlroy, who entered the week as world No 15, his lowest ranking since 2009.

"There's been a lot of hard work, but I've put my head down and I haven't really looked too much in either direction, I've just tried to do what I need to do. For a couple of months there, all that hard work seemed like it was not really getting anywhere, wasn't providing me with much. "But then, knowing that my game was pretty good coming in here and then have my neck completely lock up on me on the range on Wednesday afternoon, not even thinking I was going to play on Thursday, and then I'm sitting here on Sunday night with a trophy.

"It's been a bit of a funny week in a way. Just glad that I got through it and played some really good golf over the weekend.

"Pete deserves a good bit of credit for it, for sure. Obviously, Michael Bannon is the one that's got me all the way to this point, so I'm never going to mention Pete without Michael because Michael deserves a lot of credit, too.

"But the work that Pete and I have done over the last few weeks helped today.I had a couple of things to fall back on, which was really important, especially under the pressure of needing to hit good shots down the stretch, I had a couple of very playable swing thoughts that I've had all week.

"Pete and I did some good work last week in Florida and I felt good about my game coming in here, but obviously I wasn't expecting to come and win first week straight out again. It's satisfying to see the work is paying off, but it's just the start.

McIlroy also attributed his mental strength to his work with sports psychologist Bob Rotella, while he also gave glowing praise to Diamond for his valuable support and advice during the tournament, particularly during a long discussion following a poor drive at the 72nd hole which avoided the creek, but nestled in a poor lie inside the hazard line.

Diamond persuaded McIlroy to take a penalty drop and go for the green from a friendlier lie rather than face the uncertainty of attempting to gouge his ball back into play, and the strategy paid off as McIlroy drilled his third to 45 feet and calmly two-putted for the bogey he needed for victory.

"Harry was awesome out there today, especially that decision on the last," McIlroy said. "I was ready to get in there and try to play that with a lob wedge and he said 'Let's take a step back, let's think about this. Where's the best place you're hitting your third from?'

"So he calmed me down and slowed me down a little bit, and ultimately we made the right decision and I dropped instead of trying to play that shot out of the hazard. I hit a great third shot onto the green and was able to two-putt from there.

"I think this is our sixth win together and it's probably been our best one. Bay Hill back in 2018 was great because I hadn't won in a while, but this is even better just because Harry's been there every step of the way.

"The tough parts that I've had to endure over the last few months, he's been with me every step of the way and it's nice to come through all that with him and to get into the winner's circle again."