Jordan Spieth remains one ahead of Jason Kokrak in Texas as he chases a second PGA Tour title as many months; watch the final round of the Charles Schwab Challenge live on Sunday from 5pm on Sky Sports Golf 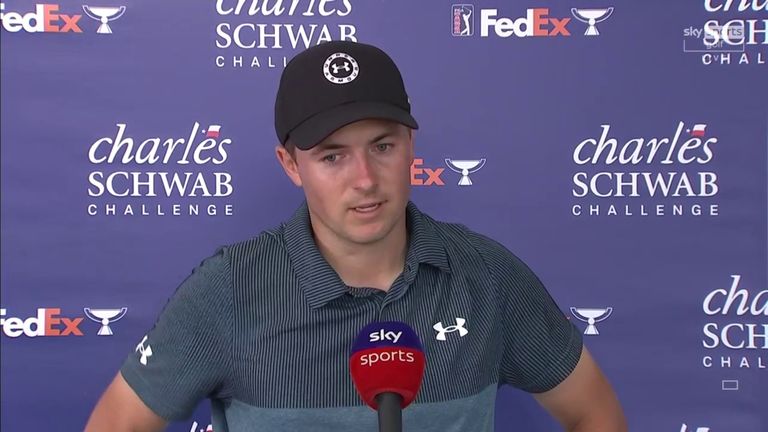 Jordan Spieth made a final-hole birdie to retain a one-shot advantage over Jason Kokrak heading into the final round of the Charles Schwab Challenge.

Spieth holed an eight-footer at the par-four last to match Kokrak's four-under 66 and keep hold of his narrow lead at Colonial Country Club, with the three-time major champion chasing a second PGA Tour title in as many months in Texas.

Sergio Garcia sits five strokes back in third after a third-round 68, with Ian Poulter a further two shots behind alongside Sebastian Munoz after a round-of-the-day 64 took him to eight under.

"Fortunately, I can control my own destiny tomorrow," Spieth said. "That's obviously what you want, when you start on Thursday, it's teeing off Sunday with a chance to control what you can."

Kokrak opened with back-to-back birdies to move alongside Spieth, who also took advantage of the par-five first and rolled in a 15-footer at the fourth, before both players dropped a shot at the fifth.

Spieth drained a 20-footer at the sixth, where Kokrak made bogey, but failed to save par at the eighth, allowing Kokrak to close the gap with a close-range birdie at the 12th.

Birdies at the 13th and 15th kept Spieth ahead of Kokrak, who made back-to-back gains from the 14th, while a 10-foot birdie from Kokrak at the 17th briefly moved him tied for the lead until Spieth's closing birdie.