US Open: Jack Nicklaus and Gary Player among the players to pay tribute to Jon Rahm after major win

Jon Rahm produced a grandstand finish to claim his first major title in the 121st US Open, with a four-under 67 giving him a one-shot victory over Louis Oosthuizen; Major champions among the players to praise the Spaniard for his win at Torrey Pines.

Golf legends Jack Nicklaus and Gary Player led the tributes to Jon Rahm after the Spaniard secured his maiden major title with a dramatic victory at the US Open.

Rahm birdied his final two holes to post a four-under 67 at Torrey Pines and finish a shot clear of South Africa's Louis Oosthuizen, making him the first Spanish winner of the US Open and taking him back to the top of the world rankings.

The 26-year-old's victory came just two weeks after he tested positive for Covid-19 and withdrew from The Memorial while holding a six-shot lead, with 18-time major champion Nicklaus - the host at Muirfield Village that week - among the first to congratulate him for his major breakthrough. 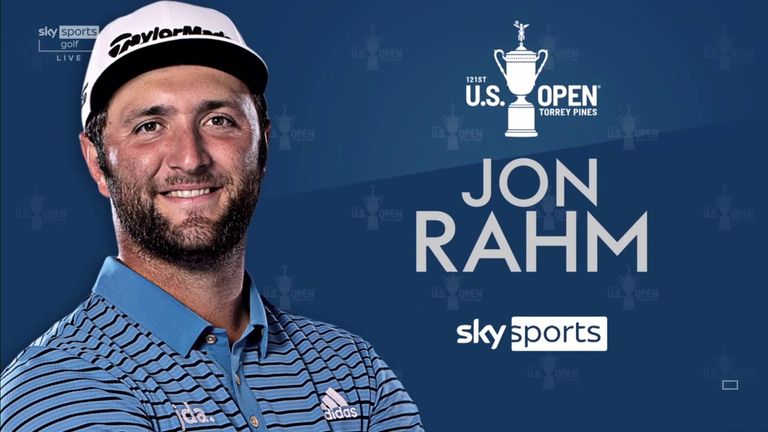 Nick Dougherty, Andrew Coltart and Paul McGinley look back at the key moments from Jon Rahm's winning round at the US Open.

"We saw a US Open Championship that any one of 10 players could've won when the back nine started," Nicklaus said. "We then saw them, one-by-one, self-destruct. It was unfortunate, but in majors that can and does happen.

"There were two players in Jon Rahm and Louis Oosthuizen who didn't self-destruct. Both Rahm and Oosthuizen played beautifully. Jon then finished a US Open like we haven't seen anyone finish in almost 40 years - two birdies on the last two holes. Jon was terrific!

I thought Torrey Pines played very difficult—it wasn't forgiving. In the end, it proved that to win the U.S. Open, you not only have to play great golf, you have to persevere.

"I was happy that Rahm won. What happened to him two weeks ago at the Memorial Tournament - being forced to withdraw with COVID when leading by six shots after three rounds, meant Jon was my pick all week. I was truly pleased and delighted for him. Jon handled what happened at Muirfield beautifully.

"Jon's acceptance speech today was terrific! He didn't blame anyone for what happened at the Memorial and said that things like this happen in life. He then shared the story of losing someone close to him because of COVID, so he truly knows how dangerous this pandemic has been.

"Barbara and I send our heartfelt congratulations to Jon. I'm sure this major is just the first of many for him! We're both happy for him and his wife, Kelley! What a nice way for Jon to celebrate his first Father's Day by winning the U.S. Open. Now, that is pretty special!"

Many players and several former major champions turned to social media to praise Rahm for his major breakthrough, with Player - a nine-time major winner - impressed with how the Spaniard recognised compatriot Seve Ballesteros in his winning interview.

How clutch were those last two putts by @JonRahmpga? What a great display of emotion when they went in as well. Jon has been knocking on the door and it was only a matter of time until he won a Major. pic.twitter.com/2s0ysN63ni

"How clutch were those last two putts by Jon Rahm?" Player tweeted. "What a great display of emotion when they went in as well. Jon has been knocking on the door and it was only a matter of time until he won a major.

"Jon has shown so much class over the last two weeks after his devastating withdrawal from the Memorial. It's great to see him turn that disappointment into the biggest victory of his career. It was also really nice to see Rahm pay great respect to Seve Ballesteros after his round.

"Finally, my heart goes out to Louis. He's come close once again. I have no doubt that he will win another major soon. Keep pushing my friend."

I’ll keep knocking on that major door. Gave it my best and am thankful to the @USGA and @usopengolf for a great week. Enjoy the win, @JonRahmpga! Nothing like a major win on Father’s Day as a new dad. #USOpen pic.twitter.com/WlXjzDhX6R

Congratulations @JonRahmpga on a spectacular @usopengolf victory 🏆 A fantastic win mate, for you and for Spain 🇪🇸

The golfing gods do amazing things and karma is wonderful. No one deserves this more than you after a few weeks ago. Congrats and welcome to the Major club. pic.twitter.com/erQsdApJtN

Man, what a finish.
Gutted for Louis.
Congrats to Rahm, he’s been on a collision course with this moment for a while now. I’m sure there’s more to come as well…..👏

What a great perspective by Jon Rahm! Congrats bro! @JonRahmpga was only a matter of time!