Former PGA champion Collin Morikawa celebrated his Open debut with the early second-round lead, although his 64 was not quite enough to equal a couple of Championship records at Royal St George's. 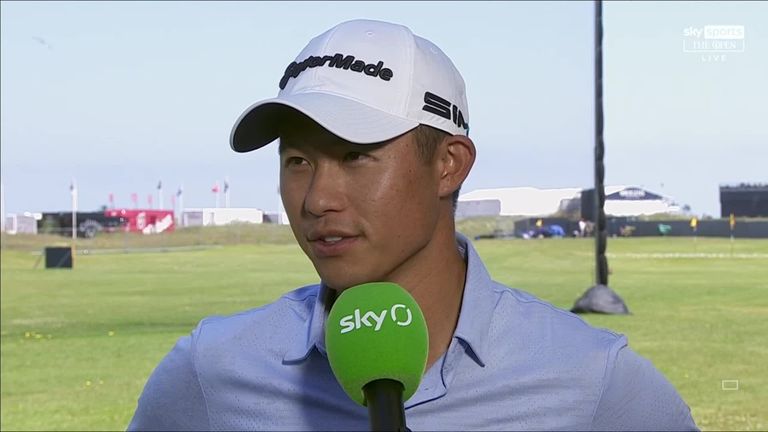 Collin Morikawa narrowly missed the chance to match Open records as he blazed his way to the top of the leaderboard early in the second round.

Morikawa put himself in excellent position to celebrate his Open debut with the halfway lead at Royal St George's after a superb 64 lifted him to nine under, three clear of Daniel van Tonder in the clubhouse, although he would end the day two behind Louis Oosthuizen after the South African came in with a 65 to set a new 36-hole Open scoring record.

But the 24-year-old, winner of last year's PGA Championship in only his second major appearance, dropped his first shot of the day at the 15th and then missed from eight feet at the last for a birdie which would have equalled the lowest 36-hole score in Open history.

His 64 was also one shy of the course record, but Morikawa was not letting his frustrating finish detract from a brilliant performance, with five birdies in seven holes either side of the turn hoisting him four shots clear of the chasing pack until he misread his five-footer for par at the 15th.

Morikawa is playing on European soil for only the second time in his career, the first being at last week's Scottish Open which he credited for getting him prepared for the challenge of firm and fast conditions on a links course.

"I wouldn't be here through these two rounds if I hadn't played last week at the Scottish," said the young American. "I've played in firm conditions. I can think of places I've played in tighter, drier conditions, but just having fescue fairways and the ball sitting a little different was huge to see last week.

"I changed my irons, my nine through seven-iron, strictly because I couldn't find the centre of the face. I was hitting these iron shots last week that I just normally don't and my swing felt good, but it was a huge learning opportunity.

"Last week I wanted to win, but I came out of it learning a lot more, and thankfully it helped for this week."

Morikawa insisted he was not overly disappointed to miss out on matching the course record or the lowest halfway total at an Open, not that he knew what those records were!

"I had no clue what any course record was, I don't know any of those numbers," he added. "I'm awful with that stuff knowing ahead. Now I do know. But I was just trying to make a lot of birdies. The bogey on 15 was a little unfortunate. I hit a good second shot out of the rough, put myself in a good position, just didn't have enough speed.

Morikawa also echoed the comments of Jordan Spieth on day one, when the 2017 champion opened with a 65 and labelled the UK fans as "the best in golf".

"They really appreciate a good shot. They appreciate when you play smart and you're in the rough and you hit it out. They know what tough golf is, and this out here can play very tough when you're not in the fairway.

"The fans out here have been amazing. Like I said from day one, they bring kind of that energy, that life into what we do, and it's really exciting to see them out here and grow as the weekend comes on."

Morikawa's 64 was later matched by Emiliano Grillo, who joined Van Tonder on six under before the resurgent Marcel Siem birdied the last two holes for a 67 to join the share of second place.

"I'm definitely very happy, I think I take 64 for any round in a major," said the Argentine. "I think I'll take 64 any day even play with my friends.