England's Charley Hull is joint-leader of the Trust Golf Women's Scottish Open going into the final round - watch on Sunday live from 2pm via the red button or for free via the Sky Sports Golf YouTube channel. 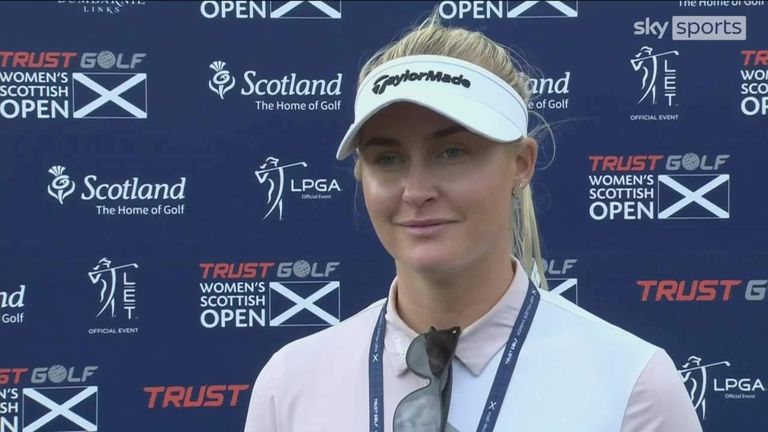 Charley Hull bolstered her hopes of ending a five-year winless run on the LPGA Tour after moving into a share of the lead heading into the final round of the Trust Golf Women’s Scottish Open.

Hull, a two-time winner on the Ladies European Tour but without an LPGA Tour title since the 2016 CME Group Tour Championship, carded a third successive 69 at Dumbarnie Links to sit alongside American Ryann O'Toole and Thailand's Ariya Jutanugarn on nine under.

Race to Costa del Sol leader Atthaya Thitikul bogeyed her final two holes to drop a shot off the lead alongside Ashleigh Buhai, with Sweden's Anna Nordqivst three off the pace in sixth place.

"It's coming to the point now where I'm playing well and I don't even know how many birdies I made," Hull said. "I can't even remember what shots I hit on the golf course like that because my brain is not thinking too much. That's my problem, I think too much. Trying to turn it off."

Going into the weekend three behind Jutanugarn, Hull followed birdies at the fourth and seventh by picking up shots at the 12th and 15th, with her only bogey coming at the 16th.

Jutanugarn lost her overnight lead when she double-bogeyed the 10th and mixed two birdies with as many bogeys on her back nine, including on the final hole, while O'Toole completes the trio at the top after a four-under 68.

Scotland's Kelsey MacDonald is tied for seventh place in a group that also includes France's Celine Boutier and former world No 1 Lydia Ko, while Emily Kristine Pedersen - going out in the final group - struggled to a third-round 77.

"I'm obviously gutted with my finish," MacDonald said after bogeying her final two holes. "I would have taken level par at the start of the day, but when I give myself those opportunities, and to finish so poorly like that is disappointing."

Who will win the Trust Women's Scottish Open? Watch the final round live on Sunday from 2pm via the red button on Sky Sports Golf and - for free - on the Sky Sports Golf YouTube channel!