Jon Rahm completes 36 holes without a bogey on his card as he claimed a one-shot lead over Tony Finau at the halfway stage of The Northern Trust, where Jordan Spieth and Xander Schauffele both raced into contention. 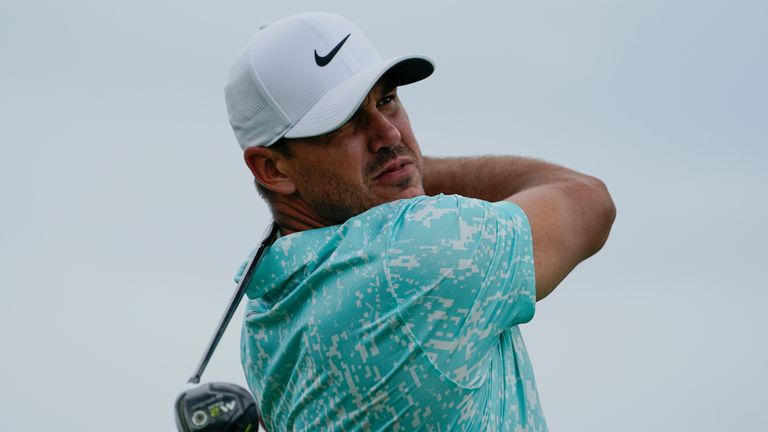 Jon Rahm claimed the halfway lead at The Northern Trust and is guaranteed to retain his world No 1 ranking after Dustin Johnson and Collin Morikawa missed the cut in New Jersey.

Rahm cruised round Liberty National in 67 to reach 12 under par, completing the first 36 holes of the tournament without dropping a shot as he earned the outright lead ahead of Tony Finau, who cost himself a tie at the top when he missed s four-foot putt for par on the final green.

Justin Thomas is just two off the pace heading into the weekend after he recovered from a poor first nine holes with an outstanding burst of scoring over his last five holes, with three consecutive birdies from the fifth followed by an eagle at the eighth in a 69.

Jordan Spieth just missed out on a course record and holed out for eagle on back-to-back holes early in his superb 62 as he raced to eight under alongside Brooks Koepka, who made five straight birdies in his 64, while Rory McIlroy scraped into the weekend after a late rally.

Rahm credited his calm demeanour for his bogey-free performance over the first two days in New Jersey, making three birdies in four holes on the front nine before picking up just one more shot at the long 13th, although he insisted that leading was more important than maintaining a clean card.

"It's nice to be bogey-free, but it's not like it's goal No 1," he said. "It might be actually the first time I've gone 36 holes bogey-free, but the goal is to win a tournament and put yourself in the best position. If I had to choose, I would rather be leading than bogey-free.

"I definitely, believe it or not, hit my fair share of bad shots today. There was two of them. The second on 16 and the second on three, two shots where I had a wedge in hand, missed on the green and I'm leaving myself a really tough up-and-down, and I was able to make good putts for par.

"I was able to save a couple of good ones, just accepting that I can miss shots, I guess that's the best way to explain it, is what happens here. You get a little too greedy, miss the green, and you can have a tough up-and-down, and I've been able to save those so far.

"Coming into the weekend, I'm definitely going to have to clean a couple of those mistakes up."

Finau birdied three of the first five holes and picked up five more shots after the turn only to falter at the last before facing the inevitable line of questioning as he chases only his second career win on the PGA Tour.

"To me, I'm more motivated to win. I've worked extremely hard on my body, on my mind, and I've done a lot of work on myself to just be better and try to be a better person and be a better golfer.

"I feel like I've accomplished some of those things, and hopefully getting a W just for myself to feel accomplished would be a great thing."

Keith Mitchell (64) and Xander Schauffele both birdied their final two holes to join Thomas on 10 under, with Schauffele matching the 62 of Spieth as well as his compatriots pair of eagles, the second a pitch-in from the rough for his second three in three holes at the eighth.

Alex Noren launched a late bid for a Ryder Cup pick as he fired a 64 to get to nine under and edge one ahead of Koepka and Spieth, who started the day flirting with the cut line and ended it in contention for the title.

Spieth admitted his 62 did not contain "normal golf" as he lit up Liberty National with his brace of eagles, holing an 81-yard wedge for a two at the fifth before carving his drive way right at the next, clearing the hazard by a few inches with his second and pitching in from the rough for a far-from-routine eagle-three.

"I didn't have many putts outside of five feet because I didn't play normal golf today," said Spieth. "It was just one of those days where you probably won't get away with that throughout the weekend. But I just chipped the ball unbelievably well and then it led to at least some short par putts and then took advantage when they were for birdie." Lee Westwood is well-placed after a 65 took him to seven under alongside prospective Ryder Cup team-mate Viktor Hovland, while Bryson DeChambeau put together another entertaining round, his 65 containing an eagle and seven birdies but also three bogeys.

McIlroy looked likely to join Johnson and Morikawa as early casualties when he stumbled to two over with just seven holes remaining, but he holed from 25 feet for birdie at the third and nailed two further good putts on the next two greens before scrambling pars on each of his last two holes to ensure employment at the weekend.